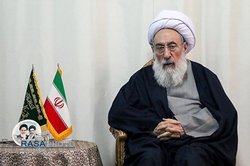 RNA – Speaking a ceremony to unveil of book “Sanad-e Entekhab” [Document of ‎the Election] in Tehran, Ayatollah Mohsen Mojtahed-Shabestari, the representative of the ‎people of West Azerbaijan province in the Assembly of ‎Experts of the Leadership, said ‎that the issue of the rule of Wilayah al-Faqih [Guardianship of the Jurisprudent] in the ‎time of the occultation of Imam al-Mahdi is one of the rational axioms, and stated, ‎‎“From the Tawqi’at al-Imam al-Mahdi [Letters of Imam al-Mahdi] to the narrations of ‎the Infallible Imams, the existence of Wilayah al-Faqih in the era of occultation has ‎been emphasized.”‎

His Eminence quoted Imam Ali and said, “In one of his sermons, Imam Ali says that the ‎most deserving person to the caliphate in the Islamic society is the strongest person in ‎the ummah, the one who is the most knowledgeable regarding the divine rulings and ‎when an instigator creates sedition, the caliph must advise him and punish him if he ‎doesn’t correct himself, like the case of the sedition of 2009.”‎

Ayatollah Mojtahed-Shabestari recalled the election of Ayatollah Khamenei as the ‎Supreme Leader of the Revolution and said, “In 1989, when the Assembly of Experts ‎convened to elect a leader, the issue of a leadership council was proposed and wasn’t ‎accepted, the discussion about an individual leader began and several people were ‎nominated for the leadership. However, based on what Imam Khomeyni said about the ‎Supreme Leader of the Revolution, the members of the Assembly of Experts elected ‎Ayatollah Khamenei as the Supreme Leader. I had gone to the late Imam privately and I ‎had raised the issue of leadership with him and he said that as long as you have Sayyed ‎Ali [Khamenei], you don’t need to worry about the leadership after me.”‎

Referring to the influence of Ayatollah Khamenei’s words, he said, “The influence of his ‎words has led to security in the country and we are witnessing unity and solidarity in ‎society today.”‎

Ayatollah Mojtahed-Shabestari added, “The Supreme Leader also raised the issue of ‎resistance economics in economic issues because they knew that the only solution to ‎the country's economic problems is a resistance economy. If the authorities act on it, ‎they will deprive the country of dependence on the outside world.”‎

Security bodies must seriously deal with the saboteurs

UK must not play with the lion’s tail

Representative of West Azerbaijan Province in the Assembly of Experts:‎

If Europe doesn’t fulfill its obligations toward Iran, an appropriate decision will be taken