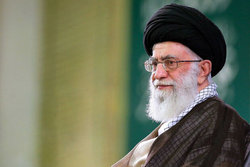 Ayatollah Khamenei has ‎issued a message to the new Parliament which was read in the opening ceremony.‎

RNA – The Supreme Leader of the Islamic Revolution, Ayatollah Sayyed Ali Khamenei, has ‎issued a message to the new Parliament which was read in the opening ceremony.‎

Highlighting that “economy and culture” are the two priorities of the country, Ayatollah ‎Khamenei called on MPs to focus more on enhancing the livelihood of people, improve key ‎economic criteria such as employment and inflation, maintain piety and fairness in ‎performing supervisory duties, adopt revolutionary stances during important incidents, and ‎have brotherly relations with Judiciary and Executive branches.‎

Expressing satisfaction over the start of the new Parliament and the shining of the Islamic ‎democracy behind the world’s eyes, Leader appreciated the efforts and motivation of people ‎for forming the new body and also congratulated the newly elected lawmakers.‎

Turning to the economic conditions in the country, Ayatollah Khamenei noted that paying ‎attention to Resistance Economy can guide the country to overcome problems.‎

Here is the full text of the message as reported by the Leader’s website:‎

In the Name of God, the Beneficent, the Merciful‎

All praise is due to God, the Lord of the Worlds, and peace and greetings be upon our ‎Master Muhammad and upon his pure household

By God’s guidance and favour, today the eleventh term of the Islamic Consultative Majles has ‎begun. Once more, the magnificent and shining countenance of Islamic democracy is ‎displaying its appeal to the whole world. I thank God the Omniscient and the Omnipotent for ‎helping the Iranian nation in their ceaseless endeavor to construct the Islamic Consultative ‎Majles. Also, I thank the dear people for their determination and motivation and I ‎congratulate the elected members for having managed to earn the trust of the voters.‎

Our late magnificent Imam considered the Majles to be the highest echelon of national ‎affairs. This could be the most complete definition for the Majles because it determines its ‎position and its responsibility in a brief sentence. If we define the law as the path of the ‎country towards the summits and destinations specified in the Constitution, then the Majles ‎guarantees a vital guideline for the materialization of that path. All governmental and popular ‎organizations and all masses of the people are obliged to take this path.‎

The guarantees for the fulfillment of this responsibility have been ensured by the Majles itself ‎‎– of course, the judiciary branch is also a guarantee as its responsibility is to ensure the ‎implementation of the law – because the Majles has the right to investigate, to reject or ‎accept the high-ranking managers of the executive branch, to warn, to question and to ‎impeach. Therefore, if the law proves to be a correct, sufficient and practical system and if ‎its execution guarantees are fully grasped, the country will achieve its lofty goals. Such is the ‎high position of the Majles and such is its important and vital obligation.‎

It is you honorable members who can give the Majles the position that it deserves. When ‎the members of Majles carry out their legislative duties and their other obligations by gaining ‎a correct understanding about the circumstances and the priorities of the country, by doing ‎expert work, with their active presence and punctuality and with sincerity and ‎trustworthiness, it will emerge as a source of hope for the people, as a source of reliance ‎for executives and as the highest echelon of national affairs in the true sense of the world.‎

Surely such a Majles will play a determining role in helping the country reach its lofty goals. ‎The main plight for members is busying oneself with detrimental trivialities, having unhealthy ‎personal and partisan motives, showing negligence in carrying out one’s duties and getting ‎involved in unhealthy ethnic, regional and tribal divisions.‎

In the present time, economic and cultural affairs are the highest priorities of the country. ‎Regarding the economy, as well as the existing tangible problems, we should acknowledge ‎that we have not gotten a good grade in terms of justice while we are in the decade of ‎progress and justice. This bitter reality should move everyone into making theoretical and ‎practical efforts to resolve the livelihood problems of underprivileged classes of society. ‎According to the opinion of experts, the best course of action for achieving this goal is to ‎reform the main areas of the national economy: employment, production, the value of ‎national currency, inflation, extravagance and other such economic areas.‎

The general policies on the economy of resistance provide a valid guideline in this regard. ‎Paying attention to the preparation of the Seventh Plan, considering that it is a short-term ‎responsibility for the eleventh Majles, as well as working on the reduction of the determining ‎role that crude oil plays in governmental funds - this is a great opportunity for designating ‎the main path of the nation’s economy - are the other pieces of advice that I wish to ‎present to you dear members. ‎

When trying to fulfil your supervisory role, I insist on you observing piety, being fair-minded ‎and avoiding personal and partisan friendships and enmities. You should not violate the ‎rights of diligent and hard-working managers, nor should you show too much leniency and ‎clemency.‎

Cooperating with one another, combining the experience of veterans with the energy and ‎enthusiasm of youth and newcomers, creating competition over doing good deeds and ‎avoiding rivalry over one’s station and rank, adopting revolutionary positions when important ‎international and domestic events come up, paying serious attention to the Majles Research ‎Centre and the Supreme Audit Court, transmitting a sense of calm and tranquility to the ‎public in the country when delivering a speech, interacting with executive and judiciary ‎branches in a brotherly fashion, repealing unnecessary and problematic laws and avoiding ‎the multiplication of laws are the other words of advice that I wish to present to you, ‎representatives of the nation. I am confident that observing these key points will prove to ‎the people of Iran that they have made the right choice and will give them more incentive to ‎participate in elections. You should regard piety, and reliance on and trust in God as your ‎inexhaustible asset and you should move in a powerful and serious manner. May God ‎support you.‎

I deem it necessary to thank the honorable members of Majles from the previous term – in ‎particular, its motivated and diligent Speaker, Dr. Larijani – and I ask God to bestow His ‎rewards for every good deed that they accomplished.‎

God’s peace and greetings be upon the Imam of the Age (may my soul be sacrificed for his ‎sake) and may divine mercy and forgiveness be showered on the pure souls of martyrs and ‎their Imam and leader – Hazrat Imam Khomeyni.‎

Greetings be upon you and God’s mercy and blessings