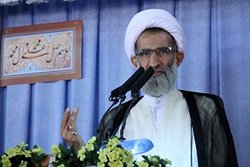 In his Friday prayer message, Hujjat al-Islam Nekounam emphasized that today the world acknowledges Iran’s management capability and said, “Certainly a powerful country will be realized in the shadow of the ‘jump in production.’”

RNA – Hujjat al-Islam Mohammad-Ali Nekounam, the representative of the Supreme Leader of the Islamic Revolution in Chaharmahal and Bakhtiari province, issued his weekly statement which has been issued in the place of his cancelled Friday prayer sermon due to the outbreak of COVID-19 (Coronavirus) referred to the martyrdom anniversary of Imam Musa al-Kadhim and its coinciding with Norouz, the Iranian new year, and said, “God-willing, in the new year, the wishes of all people will be granted and with the blessings of Bab al-Hawaij [The Gate to Fulfilling Peoples Needs], the tribulations of the country will be repulsed.”

The Friday prayer leader of Shahrekord said that this is the third Friday that large gatherings of people won’t attend Friday prayers because of the outbreak of the Coronavirus and added, “Since Friday prayer sermons are mainly reminders and these reminders are made up of command and prohibition, guidance and reproof and the explanation of the strengths and weaknesses of the people who view Friday prayer sermons as obstructing their own goals and that of their parties and groups. For this reason, they see this as an opportunity to consider their behaviour as better and perhaps assume that this warning doesn’t exist.”

Emphasizing that we must not allow the Friday reminders to be cancelled at all, he said, “By making use of the media and the internet, these reminders must be explained in the form of a Friday message and in a continuous manner and this is a necessity.”

Hujjat al-Islam Nekounam went on to say that the participation of all is necessary to get rid of this devious virus and added, “Certainly, forsaking travel, visiting and having guests over isn’t harmful but communication and going out and about in such conditions diminishes the rights of others.”

His Eminence described the revolutionary and jihadi groups as having the highest potential for the prosperity of the country and added, “These groups are supporters of the government and the Islamic system of government and therefore, they must be taken into consideration.”

He said that unity, convergence and empathy are the most important needs of the country today and added, “Fruitless political, martial and the endangerment of life have always been detrimental to the country. Certainly, these views are a great danger given the current state of affairs and waste capabilities that must be sharply avoided.”

Hujjat al-Islam Nekounam called Friday prayer leaders as being on the forefront of expressing constructive criticism for reforming the affairs of the country and said, “Certainly in the current situation, the expression of weaknesses and criticism by Friday prayer leaders is in such a way that it doesn’t make it harder to overcome the current situation.”

He also pointed to the entitling of the year 1399 by the Supreme Leader as “Jump in Production” and added, “We will certainly try and work so that through a ‘jump in production,’ we can have a resistant nation and ummah and this is possible.”

Emphasizing that today the world can acknowledge the military, defence, medical and management capabilities of our country and said, “Certainly, having a powerful country will be realized with a jump in production.”