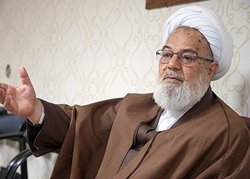 Ayatollah Mamdouhi said that the Islamic concept of “enjoining the good and forbidding the ‎wrong” is an example of democracy.‎

RNA – Speaking at the inauguration ceremony of the Educational and Scientific Guidance ‎Centre at Qom’s Qods Prayer Hall, Ayatollah Hasan Mamdouhi, a member of the Society of ‎Seminary Teachers of Qom, referred to the enemies’ propaganda attacks against the Islamic ‎society and beliefs and stated, “Today, there are more than 180,000 anti-Shi’ah and anti-‎religion bases working against Shi’ism and Islam. What have we done? We have to explain ‎this issue to the people. For this reason, the duty of the missionaries in this situation is ‎doubled.”‎

Ayatollah Mamdouhi noted, “Sometimes people, due to their lack of knowledge regarding ‎enjoining the good and forbidding the wrong, consider it at against freedom while this is not ‎the case.”‎

‎“Enjoining the good and forbidding the wrong” are two important Islamic commandments ‎and make up two of the ten Furu’ al-Din (Ancillaries of the Faith) and is based on the ‎command of the Holy Quran: “There has to be a nation among you summoning to the good, ‎enjoining what is right, and forbidding what is wrong. It is they who are the felicitous” ‎‎[3:104].‎

‎“Enjoining the good” means encouraging people to do what is good. Good is anything that ‎has been approved in shari’ah law.‎

‎“Forbidding the wrong” means forbidding evil by discouraging people from doing what is ‎wrong.‎