Iranian cleric says people in Kashmir must stand for their right 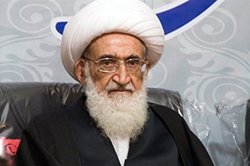 Iranian cleric Grand Ayatollah Hossein Nouri-Hamedani has urged Kashmiri people to firmly stand for their right, assuring them that the Islamic Republic will support them in this regard.

RNA - The Indian-controlled Kashmir has been the scene of protests and military crackdown and restrictions since early June, when Indian Prime Minister Narendra Modi, in a surprise move, revoked Article 370 in the Indian constitution that had granted Kashmir special autonomy, the most far-reaching political move on the disputed region in nearly 70 years.

The controversial move not only infuriated India’s nuclear-armed Pakistan, which controls parts of Kashmir, but also sparked strong anger among the local population, who want their Muslim-majority region to merge with Pakistan, prompting protest rallies that faced a brutal police response.

“If you want to secure your right, you must be prepared for martyrdom and fight,” said Ayatollah Nouri-Hamedani on Saturday, during his meeting with a group of Kashmiri students studying at seminary schools.

“Our government, the Leader [Ayatollah Seyyed Ali Khamenei], all of us will help you,” the top cleric vowed, stressing that Kashmiri clerics, in particular, must be prepared to sacrifice their lives if they want to obtain the people’s right, reminding them of Iranian clerics who were marching in the front lines of protests during Iran’s 1979 Islamic Revolution.

According to Press TV, Imam Hossein and his companions were martyred in the Battle of Karbala, in southern Iraq, in 680 AD after fighting courageously for justice against the much larger army of the Umayyad caliph, Yazid I, which some historians estimate to have been 100,000-strong.

The Shia Imam and his companions were martyred in Ashura, the 10th day of the lunar month of Muharram.

Ashura, which is the culmination of a 10-day annual mourning period, is commemorated by Shia Muslims in many countries across the world, including in Iran in particular. This day will be observed in Iran on Tuesday.