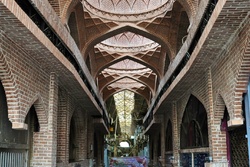 The retired professor of Kharazmin University said, “In Imam Ali’s rule, markets were established close to mosques, with former standing either by or inside bazaars; as, mosques educate people on religious rules, especially jurisprudential ones, and accordingly, businessmen could become acquainted with both the religiously allowed and disallowed issues.

RNA - Hujjat al-Islam Gholamreza Mostafapour, a seminary teacher and the retired professor of Kharazami University, through a talk, presented some notes on the characteristics of the Islamic market/bazaar and the significance of the jurisprudential education of those businessmen active in bazaar and then said, “Concerning the Jurisprudence of the Business, especially around the Islamic system in which people ought to behave in accordance with the Islamic principle, there are a lot of issues. It is widely known that once Imam Ali (AS) assumed the rule of Kufa, he himself regularly was the leader of Sunset (Maghrib) and Isha (night) prayers, and following the prayer, he spoke for people, stating, ‘Firstly, you are supposed to learn the jurisprudential rules and orders on religiously licit and illicit issues and then do businesses.’”

He added, “Evidently, there are some close links between the acquaintance with jurisprudential rules and orders on illicit and licit business issues. Thereby, Imam Ali (AS) repeatedly reminded people of this note and as a result, the former were located either by or inside the latter; as, mosques educate people on religious rules, especially jurisprudential ones, and accordingly, businessmen could become acquainted with both the religiously allowed and disallowed issues.”

Mostafapour reminisced, “The said rule applied to the majority of bazaars of the older times, i.e., bazaars were located next to mosques or in each bazaar there was a mosque. The said fact indicates the significance of the aforesaid note. On the other hand, several books have been authored by Muslim scholars on the links between mosques (education centres) and business centres.

This expert of Islamic economy, pointing to the emphasis of Quran upon the acquisition of the religious rules of business, stated, “Quran, addressing believers, ‘O you who have believed, do not consume one another's wealth unjustly but only [in lawful] business by mutual consent. And do not kill yourselves [or one another]. Indeed, Allah is to you ever Merciful’, Quran presents the basis of this important topic.” (Nisaa Surah, Verse no. 29) Through this verse, Heaven stresses that believers are not allowed to consume the wealth of each other unjustly, unless; 1. Business is done between two parties; 2. Two parties reach mutual consent in this regard.”
The retired professor of Kharazmi University, dealing with the jurisprudential rules on business, explicated, “On the other hand, indeed, the businessman working in the bazaar has to deal with different rules, as he earns a religiously lawful income through business.

Religious rules here cover those issues regarded as licit or illicit, and accordingly, business is regulated based on these principles. In order to steer clear of religiously illicit issues, the first must here is to know those data-x-items whose purchase/sale is [not] allowed by the religion.

He maintained, “Here religious rules and orders are referred to in order that the audience may know the religiously licit and illicit issues and regulate their business with regard to such laws. In order to steer clear of religiously illicit items, the first must is to know the purchase/sale of what data-x-items is [not] allowed by the religion. The late Sheikh Ansari wrote the book “Makasib” whose first part is on “Religiously Disallowed Businesses/Incomes” introducing the ill-gotten incomes.”

This seminary teacher and university professor continued, “Possibly, the dirty/unclean/impure items, such as dogs, pigs, alcoholic beverage and etc. open this part of this discussion, and the sale/purchase of such impure data-x-items is not allowed, as certainly, they are tangibly dirty items. A part of this discussion also is about the commodities sold or purchased. For instance, in doing a transaction, the deal shouldn’t be polluted with usury, as receiving or paying usury is regarded as the war against Heaven.”

Difference between transaction and usury-taking according to Quran

He further noted, “According to the Quran, a group objected that what is the difference between doing businesses and taking usury? As in business, in addition to the price of the sold goods, the seller receives an extra amount as profit. And similarly, in usury, an amount of money is lent, and upon its return, an extra amount is received, or a commodity is lent and when it is going to be returned to the lender, an extra commodity is received; however, Quran maintains, ‘But Allah has permitted trade and has forbidden interest. So whoever has received an admonition from his Lord and desists may have what is past, and his affair rests with Allah. But whoever returns to [dealing in interest or usury] - those are the companions of the Fire; they will abide eternally therein.’ (Baqarah Surah, Verse no. 275). Therefore, according to Heaven, there is a big difference between these two issues, as in doing business, different from taking usury, some people are provided with a commodity.”

The retired professor of Kharazmi University explained, “Do to the probable financial damage of the parties to the transaction or the possible change in terms of the transaction, a part of the Islamic rules and principles of business deal with the right of rescission. For instance, in the case of purchasing/selling an animal, the purchaser shall be authorized to rescind the transaction within a period of three days, and in case the seller has sustained damages or is duped in a transaction, he shall be allowed to withdraw from the transaction.”

The Islamic rules and principles of conducting business is a comprehensive set covering the conditions and terms of concluding agreements/contracts, commodities, price of goods, purchaser and seller. This set is so broad whose coverage, even by the seminary advanced levels, or putting them into practice jurisprudentially, requires a period of 10-12 years.

He stated, “According to some jurisprudents, the aforesaid set of Islamic business rules and orders, encompasses several conditions on the conclusion of contracts/agreements, commodities, price of goods, purchaser and seller, however, it is so broad that whose coverage, even by the seminary advanced levels, or putting them into practice jurisprudentially, requires a period of 10-12 years. But, nonetheless, the acquisition of these rules and orders is highly recommended, even in the absence of other advanced seminary courses and even if it takes some four or five years.”

This seminary teacher and university professor added, “Whether the Islamic government seek to act according to the behavioural example of Imam Ali (AS), it ought to make its people acquainted with the jurisprudence and the rules and orders on the religiously allowed and disallowed issues; moreover, people will be required to learn about the allowed sources of income. It is a highly significant task, the first part of which should be performed by the government, in addition, businessmen are supposed to discharge the second part of this task, and those religious scholars having influences in bazaar are also responsible to perform the third part of the said task and let people know the religious rules and orders in this regard.

Seminary should be informed of religious rules and orders

He maintained, “Such conditions apply to both incomes of the businesses inside bazaars and other occupations; it means, even an office employee should attend to these conditions and earn a religiously pure income. A few days ago, the Ministry of Education announced that a group of people earn money through the composition of MA theses and PhD dissertations for university students. It means one with no scientific competence has employed and paid someone to compose a thesis/dissertation for him. It is an act of plagiarism and disallowed religiously.

Finally, Mostafapour reminisced, “Plagiarism is the practice of taking the whole or parts of someone else's work or ideas and passing them off as one's own. Unfortunately, due to neglect of religious rules and orders, different types of ill-gotten incomes are observed in our society, including selling goods with unlawfully exorbitant prices, selling underweights, usury-taking and etc. Thereby, seminaries are supposed to be informed of such issues, especially the new ones, and let people know about them and prevent from consumption of ill-gotten incomes, as the ill-gotten incomes/money causes several problems in the society.”