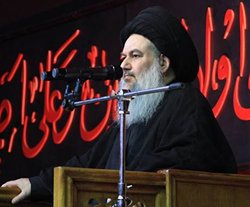 A prominent Iraqi scholar said, “Mourning and holding mourning ceremonies during the ‎‎month of Muharram is a good tradition and sometimes it becomes a collective obligation.”‎

According to Rasa News Agency’s correspondent in Najaf,‎‏ ‏Ayatollah Sayyid Yasin al-‎Musawi, a senior Iraqi scholar, said, “Mourning and holding ‎mourning ceremonies in ‎the month of Muharram is a good tradition and sometimes it becomes a collective ‎obligation and God ‎Almighty has entrusted the performance of this noble tradition to the ‎Shi’ahs (followers) of ‎the Ahl al-Bayt.”‎

His Eminence said, “Many of the satellite channels, while supporting the propagation of ‎‎Wahhabi clerics against Ashura and Muharram, continue to spread doubts despite the fact ‎‎that both Shi’ah and Sunni scholars alike have emphasized in the hadith books that the ‎‎Prophet Muhammad and his Ahl al-Bayt held mourning ceremonies for Imam al-Husayn.”‎