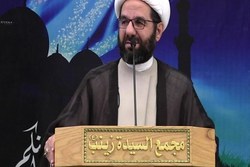 The deputy chairman of Hezbollah’s Executive Council, Sheikh Ali Daamoush, pointed out that the military and political plans made by the US and Israel against Hezbollah have failed.

RNA - The deputy chairman of Hezbollah’s Executive Council, Sheikh Ali Daamoush speaking in al-Balada Hussainia, stated, “Following their defeats in military and political fronts, enemies launched propaganda against the Resistance, however, they failed once again.”

He added, “Whatever the enemy has done, sanctions, military attacks and etc., have failed. Now the US and Israel are disappointed as they couldn’t achieve their aims.”

He finally noted, “In the present conditions, we should do our best for preserving the political stability and solving economic problems of people. The current economic situation isn’t good, and thus, all officials are required to do their responsibilities and resolve problems through Resistance strategies.”