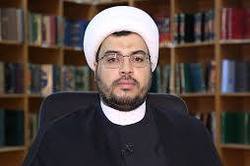 The secretary general of the Iraqi al-Ghura Institute of Islamic Knowledge stated that the change in the positions of the US towards Iran is the blessed outcome of the Iranian people’s patience.

RNA - Hujjat al-Islam Sheikh Qasim al-Hashemi, the secretary general of the Iraqi al-Ghura Institute of Islamic Knowledge, in the gathering held on the anniversary of the decease of Imam Khomeini in imam al-Hassan al-Mujtaba (AS) Hussainia in Najaf, participated by representatives of the sources of emulation, Friday prayer leaders, politicians, religious and social figures, said, “The resistance and patience exercised by the Iranian people forced the US to morph its recent positions towards Iran.”

Saying that Iraq and the region are facing multiple perils, he added, “We can make changes to the political situations if we employ Imam Khomeini’s Sireh (practical behavior).”

Mentioning that Iran is against war, he said, “We announce our supports and solidarity with the leader and people of Iran, as they stood by us in all conditions and defended Iraq in the battle against the terrorist groups.”

Hujjat al-Islam Sheikh Hashemi finally maintained, “Despite the threats and dangers posed by the US over holding this ceremony, al-Ghura Institute holds this gathering every year. Patience and resistance bears the fruit of victory and it is exactly happening for Iran.”