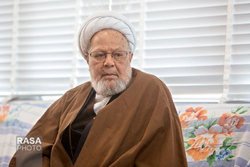 Rasa – A member of the Society of Seminary Teachers of Qom and said, “The conditions of today are different from the past and that enemies have several plans for us and the missionaries must explain these threats to the people.”

RNA – In an exclusive interview with Rasa News Agency, Ayatollah Hasan Mamdouhi, a ‎member of the Society of Seminary Teachers of Qom, referred to the holy month of ‎Ramadhan and the presence of missionaries and clerics on their missions in various parts of ‎the country and said, “We have a number of issues in this regard, first, a good missionary ‎must firmly establish himself in the system of belief and has reached a strong belief in God ‎Almighty.”‎

The former representative of the people of Kermanshah province in the Assembly of Experts ‎added, “In this case, the words and statements of a missionary are effective because they ‎believe and speak and some people don’t know that missionary work is their duty and their ‎firm belief is that their statements are simply chattering and aren’t very influential.”‎
‎ ‎
Referring to the other features of good missionary work, Ayatollah Mamdouhi said, “The ‎second important issue is that a missionary has enough literacy in relation to Quranic verses, ‎narrations and the sayings of past scholars and are polite in regard to divine customs.”‎
‎ ‎
His Eminence said that knowing the audience is another feature of the missionaries and ‎emphasized, “The missionaries and clergymen must recognize the society and divide the ‎people as they are and present material to them in accordance to the level that they are at. ‎They must differentiate between the lower-level and educated people and talk to each of ‎them in a manner which is befitting to their status.”‎
‎ ‎
Referring to the difference between the missionary work of today and that of the past, ‎Ayatollah Mamdouhi ‎said, “What is different today is the new commodities that came into ‎being and the rapid communication that has been made between people. Therefore, the ‎clergy who want to talk must speak about the necessities and benefits to the people and to ‎keep the people away from the evil plans that the enemies have provided for us.”‎