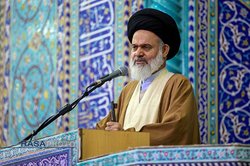 Ayatollah Hoseyni-Bushehri said, “The terrible explosion in Lebanon was definitely ‎perpetrated by internal mercenaries and external agents and the West started sedition ‎instead of expressing sympathy with the Lebanese people.”‎

RNA – In a statement made in lieu of Friday prayers which have been cancelled due to the ‎‎COVID-19 (Coronavirus) outbreak, Ayatollah Seyyed Hashem Hoseyni-Bushehri emphasized ‎on paying attention to the religious life of society, said, “We must be careful not to harm our ‎religious life otherwise, we will suffer losses in this temporal world and the hereafter, perhaps ‎people who are seemingly religious will be corrupted due to lack of attention.”‎

In another part of his speech, he referred to the West’s conspiracy against Lebanon, saying, ‎‎“The terrible explosion in Lebanon was definitely perpetrated by internal mercenaries and ‎external agents and the West started sedition instead of expressing sympathy with the ‎Lebanese people. The President of France [Emmanuel Macron] apparently went to Lebanon ‎to offer condolences but made threatening remarks and the Prime Minister of Lebanon ‎‎[Hasan Diab] was forced to resign.”‎

Ayatollah Hoseyni-Bushehri referred to the wise management of Hujjat al-Islam Sayyid Hasan ‎Nasrallah in Lebanon, said, “We hope that Sayyid Hasan, as always, will overcome the ‎sedition of the enemies with patience and wisdom, and that Lebanon, the bride of the Middle ‎East, will return to peace.”‎

His Eminence went on to say that the President of the United States [Donald Trump] is mired ‎in a terrible quagmire, “The United States have the highest number of casualties from the ‎Coronavirus and are facing severe economic problems. On the one hand, Trump is ‎campaigning and on the other hand, he is hostile to Iran.”‎

He said, “In the Joint Comprehensive Plan of Action (JCPOA), it was scheduled that Iran ‎wouldn’t be able to buy and sell weapons until the restrictions were lifted, but today the ‎Americans are trying to continue to ban the buying and selling weapons and prevent Iran ‎from having facilities and self-sufficiency, which of course won’t succeed and the enemies’ ‎conspiracy will fail.”‎

Ayatollah Hoseyni-Bushehri discussed the upcoming month of Muharram, said, “The ‎Coronavirus has caused restrictions in the commemorations but we shouldn’t go to ‎extremes. Some say we should cancel the commemorations and others say we should hold ‎them in the same manner as in previous year but we should consider the middle ground and ‎mourn by following the hygienic instructions when mourning. It’s important to preserve the ‎lives of human beings and to preserve the mourning of the martyrs.”‎