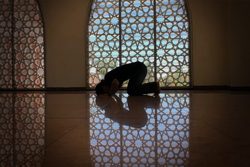 Sometimes Satan and man’s nafs al-ammarah (the commanding soul) and makes him ‎pessimistic about God and His vast mercy and demonstrate repentance as so great and ‎impossible that it is discouraged.

Sometimes Satan and man’s nafs al-ammarah (the commanding soul) and makes him ‎pessimistic about God and His vast mercy and demonstrate repentance as so great and ‎impossible that it is discouraged. Let us not forget that the despair of God’s mercy is ‎the greatest sin itself and we must seriously return to the open arms of the mercy of ‎truth, for He is the Acceptor and the Merciful.‎

Why do we still break the covenant despite all of this tawbah (repentance) and istighfar ‎‎(seeking forgiveness)?‎

There are several reasons for returning to sin and breaking one’s promises, the ‎following are some of them:‎

‎1. Weak faith: One of the most important causes of sin and returning to it after ‎repentance is the weakness of faith in God, the angels, heaven and hell, the Messenger ‎of God [Muhammad], the Quran, etc. [1]‎

‎2. Not knowing the meaning of true repentance: Many think they have repented ‎but they do not know that repenting is not just uttering a word. Rather, man should ‎regret his past, be seriously determined not to repeat that sin, return the rights of the ‎people, return to the obligatory acts of worship and if he has not made up for them ‎perform them. [2]‎

‎3. The temptation of Satan and the nafs al-ammarah (the commanding ‎soul): Sometimes Satan and man’s commanding soul and makes him pessimistic about ‎God and His vast mercy and demonstrate repentance so great and impossible that it is ‎discouraged. Let us not forget that the despair of God’s mercy is the greatest sin itself ‎and we must seriously return to the open arms of the mercy of truth, for He is the ‎Acceptor and the Merciful.‎

‎4. Not knowing the effects and benefits of repentance: True repentance has ‎effects, including the following [3]:‎

b. One who repents is praised and prayed for by the angels.‎

c. The true repentant will go to heaven.‎

e. Repentance leads to the answering of one’s supplications. ‎

f. Whatever the sin, it is cleansed by repentance.‎

‎5. Lack of perseverance in repentance: One of the reasons for returning to sin is ‎the lack of perseverance in repentance. If a person is constantly engaged in seeking ‎forgiveness and reciting Du’a al-Tawbah (Supplication of Repentance), especially ‎supplication 31 [Imam Ali al-Sajjad’s Supplication in Repentance] of Sahifah al-‎Sajjadiyyah (The Book of Sajjad) and Munajat al-Ta’ibin (The Whispered Prayer of the ‎Repenters), he is constantly in a state of consciousness and always notices the presence ‎of God when he is sinning. [4]‎

‎6. Improper friends: Another factor in neglecting and turning to sin is encouraging ‎bad friends with words and deeds. Man is a social being and whether he wants to or ‎not, he has a positive or negative effect on others. What is better for a person to do ‎his best in choosing a friend and to travel only with someone who, according to the ‎order of the religious leaders, has three qualities: [5]‎

‎1. Seeing him reminds you of God.‎
‎2. His words add to your knowledge and awareness. ‎
‎3. His actions encourage you to do good deeds.‎

‎7. Paying attention to instant and fleeting pleasures: Because we humans deal with ‎emotions every day, we think more about immediate and fleeting pleasures. If we are ‎careful and use our “resurrection intellect” more than our “subsistence intellect,” we will ‎understand that lasting, eternal and complete pleasure is better than short-term and ‎unstable pleasure. In our books on etiquette, it is written that man can achieve ‎intellectual pleasures through worship and contemplation, a pleasure that is not ‎comparable to material pleasures. ‎

The poet, Sa’adi Shirazi, said: “If you know the pleasure of abandoning pleasure, you ‎will not enjoy pleasure anymore.”‎

‎8. Neglect of death: Sometimes man is tempted by Satan and his soul and assumes ‎that there is always time to return and does not realize that death is not announced to ‎anyone. There comes a time when we have committed many sins and have no time or ‎way to return and truly repent. By remembering death and paying attention to the ‎presence of God, we can prevent the repetition of repentance and breaking repentance.‎

‎9. Lack of permanent remembrance: Remembrance causes constant attention to ‎God. In a narration, Imam Ali said, “A believer constantly remembers [God], frequently ‎contemplates, is thankful for blessings and patient in the face of tribulation.” [6] It is ‎certain that if the angel of the remembrance of God enters the realm of the heart, the ‎black demon of sin will leave the house of the heart.‎

‎10. Not knowing the meaning of repentance: Intentionally breaking one’s ‎repentance is disregarding and, according to some narrations, mocking God. How ‎difficult is it for us if someone makes a promise to us and then publicly breaks his ‎promises without any excuse? We feel that he has insulted and humiliated us Likewise, ‎if one deliberately returns to sin according to God’s station, in fact, he has minimized ‎God. This in turn causes man to commit greater sins.‎

‎11. Insisting on small and big sins: Sin, whether small or large, means dissatisfying ‎God. Sin means turning man back from the path of perfection, sin means that man cuts ‎the roots of his divine innate nature and conscience with a sharp ax of transgression ‎and deprives himself of the sweet rewards of reaching God the Merciful. One who ‎gradually adds to one’s sins does not realize that one is slowly approaching animal ‎traits and distancing oneself from one’s spiritual position and these actions cause the ‎heart to darken. Such a trait destroys the sensitivity of conscience, innate nature and ‎intellect to sin to the point that sin becomes normal for this person without feeling any ‎discomfort inside. [7]‎

‎14. Sinful environment: We have a narration from Imam Ja’far al-Sadiq that says: “A ‎believer must not sit in a gathering where God is disobeyed if he is unable to make a ‎change.” [8] These gatherings affect human nature in the long run and slowly they keep ‎him from the path of perfection. If a person cannot prevent sin by inviting positive ‎actions and thoughts, he should at least save himself from the fire of these gatherings ‎and keep his head above water.‎

‎15. Weak will: Sometimes man wants to distance himself from sin and breaking his ‎repentance but because of the weakness of the will, he cannot. Scholars of Islamic ‎ethics recommend that by performing duties and paying attention to spiritual matters ‎‎(prayers, supplications, oral advice, reading moral books, meeting scholars, choosing a ‎suitable friend, etc.) and strengthen our spiritual dimension so that we can overcome ‎the animal dimension (lusts, passions, temptations, etc.).‎

‎16. Compliance with Satan: Returning to sin is in harmony with Satan, Satan who ‎swears to turn us away from the mercy of God [9] if man is conscious (by supplication, ‎remembrance, intercession, a good friend, studying, etc.) At the time of sinning, he ‎realizes that by returning to sin and breaking his promises, he has provided the means ‎for Satan’s happiness and sorrow to God. This attention causes piety and not breaking ‎one’s repentance.‎

Ayatollah Seddiqi’s important advice for removing the tribulation from society

‎‘2030 Agenda for Sustainable Development’ is a colonial document ‎

Representative of Ayatollah al-Sistani in Europe:‎

We must assist the needy during Ramadhan