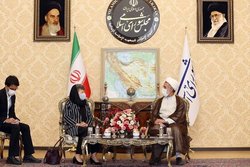 The chairman of the National Security and Foreign Policy Committee of the Islamic ‎Consultative Assembly said, “The presence of the United States and the dominating ‎powers in the region has brought nothing but war and the growth of terrorism.”‎

RNA – During a meeting with the Australian Ambassador to Iran, Ms. Lyndall Sachs, ‎Hujjat al-Islam Mojtaba Zonnour, the chairman of the National Security and Foreign ‎Policy Committee of the Islamic Consultative Assembly, positively assessed the history ‎of relations between the Islamic Republic of Iran and Australia and said, “The will of the ‎Islamic Republic of Iran is to strengthen comprehensive relations with Australia. Tehran ‎always welcomes the promotion of relations and the expansion of cooperation in ‎various fields with Canberra.”‎

Hujjat al-Islam Zonnour emphasized, “The presence of the United States and the ‎dominating powers in the region has brought nothing but war and the growth of ‎terrorism and the presence of the Iranian navy has had a great impact on limiting the ‎evils of pirates in the Indian Ocean, the Gulf of Oman and the Gulf of Aden.”‎

His Eminence considered Australia’s joining the United States-led coalition as tarnishing ‎Australia’s reputation in the eyes of nations and as undermining the country’s relations ‎with Iran.‎

He expressed regret over the Australian Prime Minister Scott Morrison’s concern over ‎the reduction of the implementation of Iran’s commitments to the Joint Comprehensive ‎Plan of Action (JCPOA) in a letter to the President of the Islamic Republic of Iran ‎‎[Hasan Rouhani] and said, “Instead, the Australian Prime Minister should have ‎corresponded with [American President Donald] Trump and European leaders, urging ‎them to fulfill their commitments to the JCPOA, not jeopardize this global treaty and ‎not put economic and medical pressure on the Iranian people by imposing oppressive ‎sanctions.”‎

Hujjat al-Islam Zonnour stated, “Iran has always fulfilled all of its obligations and duties ‎to the JPCOA and the unfaithfulness of the United States and Europe’s irresponsibility ‎has led the loss of the inalienable rights of the Iranian people and it’s natural and fair ‎that until the other side returns to fulfill its obligations, Iran should also reduce the ‎level of its actions.”‎

Referring to Iran’s special position in the Middle East, he said, “The strategic position of ‎the Islamic Republic of Iran, as well as regional stability and security, has created a ‎smooth path for investment and development of trade, commerce and tourism ‎interactions with Australia.”‎

Ambassador Sachs also called the meeting a good opportunity to strengthen ‎cooperation and expand interaction at various parliamentary levels, adding that there ‎are many commonalities for developing and deepening relations between the two ‎countries.‎

She stated, “Parliamentary interactions are the turning point of the relations between ‎the two countries and the expansion of interactions and exchanges between the two ‎countries through their respective parliaments will be very important.”‎

Chairman of the National Security and Foreign Policy Committee of the ‎Iranian Parliament: ‎