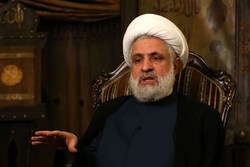 The second-in-command of Lebanon’s Hezbollah resistance movement said the 2000 ‎liberation of southern Lebanon from the Israeli occupation put an end to the regime’s so-‎called “military invincibility.”‎

The official said that thanks to the blow dealt to the Israeli military two decades ago, “we ‎have moved from the stage of despair to hope, from surrender to resistance, from ‎humiliation to honour, and from defeat to victory.”‎

Hujjat al-Islam Qasim said the liberation of southern Lebanon opened the door to more ‎consecutive victories for Lebanon, Palestine and the entire region against the Zionist regime ‎and American plots, including the creation of the Daesh terror group.‎

The historic triumph, he added, put an end to the Israeli military’s invincibility myth and ‎helped strengthen the faith of the young generations in resistance and struggles towards ‎liberating Palestine from the Israeli occupiers.‎

‎“The developments that unfolded in the region over the past years proved that pro-Israel ‎world powers and the solutions that they offer for regional conflicts cannot be trusted,” he ‎added.‎

‎“We are currently in the midst of a war and there is still a need for resistance,” said the ‎Hezbollah official, emphasizing the necessity for the resistance front to stay fully ready for ‎any future scenario, Press TV reported.‎

Every year in May, Lebanon commemorates the anniversary of the Israeli withdrawal from ‎its southern territories, known as Resistance and Liberation Day.‎

Hezbollah forces pushed the Israeli troops out of the southern parts of Lebanon on May 25, ‎‎2000, after more than two decades of occupation.‎

The national holiday in Lebanon is seen as a turning point that changed the regional ‎equations and debunked the myth of Israel’s invincibility.‎