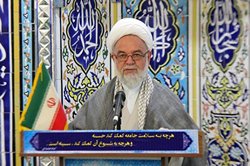 Ayatollah Yaqoubi emphasized on taking advantage of the spiritual opportunities of the month of Sha’ban to enter the month of Ramadhan and said, “Sha’ban is the promise of the descent of branches, especially the branches of divine mercy on the servants.”

RNA – In a virtual sermon issued in lieu of his weekly Friday prayer sermon, Ayatollah Abolqasem Yaqoubi, the representative of the Supreme Leader of the Islamic Revolution in North Khorasan province, congratulated the believers on the beginning of the blessed month of Sha’ban and said, “Sha’ban is a blessed month, full of happiness, good and blessings and we should all take full advantage of this special spiritual opportunity.”

The Friday prayer leader of Bojnourd added that the month of Sha’ban has several names and titles and added, “One of the names of this month is ‘Sha’ban’ which means ‘Branch of Divine Mercies’ because in this month God has bestowed special mercy upon the people and branches of divine mercy flow toward the people.”

He added, “Another name for this month is ‘Jiran’ which means ‘Neighbour’ because the month of Sha’ban is the introduction to the month of Ramadhan and it provides man with access to Ramadhan.”

His Eminence added, “Another name for this month is ‘Shafa’ah’ [‘Intercession’] because God has allowed the Prophet Muhammad to be His interceder with the ummah during this month.”

He said that for this reason, we must try to send more salawat (salutations) upon Muhammad and the Family of Muhammad during this month than any other time and added, “Imam Ja’far al-Sadiq said, ‘In the month of Sha’ban, send more salawat on the Prophet and his Ahl al-Bayt.’”

In another part of his remarks, Ayatollah Yaqoubi referred to the 12th of Farvardin (March 31), which is celebrated as Islamic Republic Day and stated, “Next week we have a great day and eid, the day of the establishment of the Islamic Republic.”

Ayatollah Yaqoubi added, “Our people went to the polls 41 days ago on the orders of the late Imam Khomeyni and more than 98% of the people said ‘yes’ to the Islamic Republic and after the announcement of the results, the Imam said ‘this is our great Eid.’”