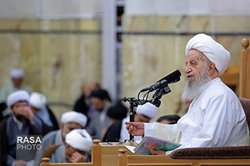 The revered source of emulation invited the Iranian people to participate in the upcoming legislative election in a widespread and enemy-defeating manner and considered this to be the cause of the enemies’ despair.

RNA – At the beginning of his dars al-kharij (post-graduate) class at Qom’s Grand Mosque on February 18th, Grand Ayatollah Naser Makarem-Shirazi invited everyone to be present at the ballot boxes in the February 21st legislative election in a widespread and informed manner.

The revered source of emulation emphasized that our eyes aren’t blind to the facts and that people are truly under pressure because of the increased costs, inflation and the economic and youth issues because of unemployment, marriage and housing problems and added, “We know the plight of the people and believe that some of these problems are creating a clamour but we insist that one must act in a vigilant manner in regard to the election.”

Ayatollah Makarem-Shirazi said, “The enemies have been hoping for a low turnout and lackluster reception in the February 18th election and therefore, we must frustrate and despair the enemies at the ballot box with our widespread and informed presence but if our reception is low, they will be hopeful for greater pressure and sanctions.”

The teacher in the Islamic Seminary of Qom noted, “The enemies have imposed the toughest sanctions in history against Iran and our people but they didn’t have an effect. Reason says that we must have a widespread and passionate presence in the election and prove that Iran is an independent state and that the Islamic system is a stable and strong system.”

He said, “It’s necessary for everyone to participate in the elections on Friday and God-willing, good results will be achieved.”

Referring to the causes of the country’s economic problems, Ayatollah Makarem-Shirazi said, “Part of these problems is due to the oppressive pressure and sanctions by the enemies and the cost of independence of the country and the other part is caused by the management problems. We believe that if the management is implemented in a proper manner, a significant part of the problems will be solved.”