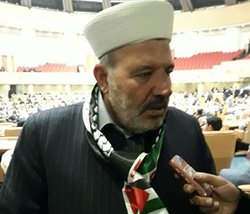 Shaykh Diab Abu Ibrahim said, “The enemies are using the weapon of economic sanctions ‎to access the weapons of the Islamic Resistance.”‎

RNA – In an exclusive interview with Rasa News Agency, Shaykh Diab Abu Ibrahim, a ‎member of the Association of Muslim Scholars of Lebanon, referred to the latest ‎developments in the Middle East and said, “Undoubtedly, what is happening in Lebanon, ‎Syria, Yemen, Libya and Palestine is a conspiracy by the enemies of the Islamic Ummah – ‎namely, the United States, the Zionist occupation regime and some Arab countries.”‎
‎ ‎
The Lebanese Sunni cleric said that the enemies are seeking to weaken the Islamic ‎Resistance Front and added, “The armed forces of the Islamic Resistance Front have been ‎standing up to the enemies of the Islamic Ummah and therefore, they use every possible ‎action to weaken them.”‎
‎ ‎
Pointing out that the Islamic Resistance Axis has achieved valuable victories in the region, ‎Shaykh Abu Ibrahim added, “The opportunists of the Islamic Ummah are well-aware that the ‎Palestinian territories will not be liberated except through jihad.”‎

He added, “The increase of the prices of goods and corruption are among the issues that ‎undermine Islamic unity and therefore, we call for administrative reform and the fight against ‎corruption in the government and these are issues of our religious dignity.”‎

His Eminence stated that we need more Islamic unity and resistance against the enemies at ‎this time than ever before and noted, “The enemies are also benefiting from the weapon of ‎economic sanctions in pursuit of their goals so that they may be able to access the weapons ‎of the Islamic Resistance and create sedition among the Muslims.”‎
‎ ‎
Shaykh Abu Ibrahim said Imam Khomeyni called the enemies foolish and continued, ‎‎“Enemies are the instigators of the war and are killing innocent children and women and we ‎have seen this repeatedly in different countries and regions, such as the Gaza Strip, but ‎unfortunately, Arab governments are silent on the crimes of the Zionist occupation regime.”‎
‎
Rasa News Agency