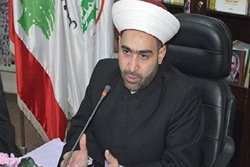 Referring to the twentieth anniversary of the liberation of southern Lebanon, Shaykh Ahmad ‎al-Qattan said, “The triad of the people, the army and the Islamic Resistance continues to ‎stand against the arrogant Zionist regime.”‎

RNA – In an exclusive interview with Rasa News Agency, Shaykh Ahmad al-Qattan, the head ‎of Lebanon’s Qawluna wal-Amal [Say and Act] Society, said that the twentieth anniversary of ‎the liberation of southern Lebanon from the filth of the Zionist occupation and explained, ‎‎“This victory was due to the efforts of the Lebanese Islamic Resistance Forces and the ‎cooperation of the people and the army of this country and the triad of the people, the ‎army and the Islamic Resistance continues to stand against the arrogant Zionist regime.”‎

The Lebanese Sunni cleric said, “The Muslim people should stand up against the ‎conspiratorial rulers and not allow them to conspire against the important issues of the ‎Islamic world, especially the issue of Palestine and the fight against the Zionist regime which ‎has usurped the first qiblah [of Islam].”‎

Shaykh al-Qattan added, “The Arab people must benefit from the experience of liberating ‎southern Lebanon from the Zionist regime in its struggle against the army of this occupying ‎regime. [The Zionist occupation army] is an army that many believed was invincible.”‎

Shaykh al-Qattan added, “Hezbollah is now in a position of deterrence, not self-defence, ‎against the Zionist regime, and this regime considers Hezbollah’s response at the top of its ‎calculations before committing any foolish faction against Lebanon and this deterrent power ‎is thanks to the Islamic Republic of Iran and those who support the Islamic Resistance ‎groups in the region.”‎

Member of the Movement for the Advancement of Lebanon:

Iranian Sunni Cleric at World Forum for Proximity of Islamic Schools of Thought:‎

Nasrallah has a positive view towards new Lebanese cabinet.