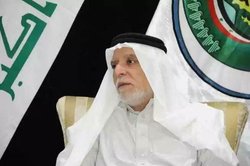 A prominent Iraqi cleric has issued historical statement calling the Sunni community in the ‎Arab country to defend Iran.‎

RNA – Shaykh Abdul-Latif al-Hamim, the head of the Sunni Endowment of Iraq, has issued a ‎fatwa (religious edict) mandating all Sunni communities in the Arab country to defend Iran ‎against the hostile policies of the United States.‎
‎ ‎
This is while Iraqi media have called the fatwa as unparalleled and the first of its kind since ‎the topple of former dictator Saddam Hussein.‎
‎ ‎
A renowned figure among Iraqi intellectuals and author of several books on Islamic teaching, ‎al-Hamim stressed, “Not only Iraq, but also all members of the Islamic nation are expected ‎to confront the hostile policies of the United States against Iran and all Islamic and Arab ‎states.”‎
‎ ‎
He added, “All changes in the Middle East and across the world of Islam are part of a project ‎to neutralize the most powerful players in the world of Islam and distancing the regional ‎players from the equation of power in front of the Zionist regime of Israel.”‎
‎ ‎
al-Hamim noted that a Zionist plan with which they have ousted Iraq, Syria and Libya from ‎the equation of power as they are struggling to do so with Egypt.‎
‎ ‎
The Iraqi cleric called the hostile policies of the United States against Iran to be in line with ‎the Zionist project which will continue till withdrawing all regional players from the power ‎equation in the Middle East.‎