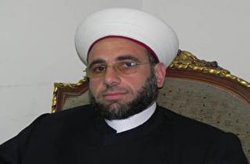 Shaykh Abdul-Razzaq ‎referred to the oppression carried out by the Nigerian army against ‎Hujjat al-Islam Shaykh Ibrahim Zakzaky and stated, “The Islamic Ummah will confront the ‎oppressive actions carried out against Shaykh Zakzaky.”‎

RNA – In an exclusive interview with Rasa News Agency, Shaykh Maher Abdul-Razzaq, the ‎head of Lebanon’s Reform and Unity Movement, referred to the deteriorating situation and ‎health of the Nigerian Shi’ah leader, Hujjat al-Islam Shaykh Ibrahim Zakzaky, said, ‎‎“Whenever we witness the silence of international assemblies in relation to human rights ‎abuses, we must look at the behind-the-scenes involvement of the United States because ‎the international community and many human rights organizations have become obedient to ‎the United States.”‎

The Lebanese Sunni cleric stressed, “For this reason, whenever the rights of religious ‎scholars, including Shaykh Zakzaky and other scholars who present true Islam to the Islamic ‎Ummah, are violated and crimes are committed against them, the international community ‎and most human rights organizations sat with their hands closed, without taking any action ‎to support these scholars.”‎

Shaykh Abdul-Razzaq ‎emphasized Saudi Arabia’s role in the crimes of the Nigerian army ‎against Hujjat al-Islam Zakzaky, and said, “Saudi Arabia is involved in sedition and advancing ‎the plans of the United States and its plots against the Islamic Ummah and targets the ‎brotherhood of Muslims in Nigeria, Syria, Iraq and Yemen. Saudi Arabia has become a tool ‎for implementing the Zionist regime’s plans in the region.”‎

His Eminence added, “Muslims must stand against Saudi interference, which has led to harsh ‎actions against Shaykh Zakzaky because Saudi officials are carrying out the same seditious ‎activities in Nigeria as they are carrying out in other Arab and Islamic countries in order to ‎target the freedom and human dignity of Muslims.”‎

Shaykh ‎Abdul-Razzaq continued, “The actions of the Nigerian army against Shaykh Zakzaky ‎represent the oppression of the Islamic Resistance Axis and its scholars. Although Shaykh ‎Zakzaky serves the Muslims in Nigeria and assists the Shi’ahs of this country with patience ‎and struggle, he is the victim of the devastating and oppressive Zionist-American policies. In ‎fact, this is a ploy of the United States, the Zionist regime and their followers in the region ‎who target the Muslims of the Islamic Resistance Front by adopting oppressive policies.”‎

Shaykh Zakzaky, the head of the Islamic Movement in Nigeria (IMN), now 66, has been in ‎detention since December 2015 after his residence in the city of Zaria was raided by Nigerian ‎forces, during which he was beaten and lost vision in his left eye.‎

During the brutal crackdown, three of his sons lost their lives, his wife sustained serious ‎wounds, and more than 300 of his followers were killed.‎

0
0
Answer
The time Almighty Allah wanted and allowed knowing the excellence of ahlul byt as has come .

Let's Jews and mercenaries do theirs and Allah's reinforcement be sighted.
Please type in your comments in English.
The comments that contain insults or libel to individuals, ethnicities, or contradictions with the laws of the country and religious teachings will not be disclosed