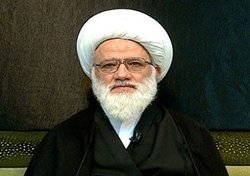 According to Rasa News Agency’s correspondent in Najaf,‎‏ ‏Ayatollah Muhammad al-‎Yaqoubi, a revered Najaf-based source of emulation, held a majlis (gathering) in ‎commemoration of the martyrdom of Imam al-Husayn at his office in Najaf. ‎

Teachers and students of the Islamic Seminaries, along with a group of youth from Baghdad ‎governorate, attended the majlis. ‎

On the sidelines of the commemoration, Ayatollah al-Yaqoubi called on the lecturers and ‎mourners of Imam al-Husayn to adhere to the goals of the Husayni movement and to apply ‎its effect into their individual and social behaviour.‎