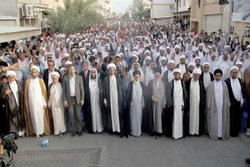 Bahraini people announced that the House of Khalifa Regime has adopted the policy of brutality and killing and emphasized the execution of Ayatollah Isa Qasim’s statement in standing against cruelty.

RNA - The residents of Bahrain ad-Dayr region, holding a demonstration, condemned the execution of two Bahraini youths and stressed that Ayatollah Isa Qasim’s statement should be followed.”

The demonstrators emphasized that House of Khalifa still follows the policy of brutality and killing and the execution of two Bahraini youths showed that it acts illegally.

Bahraini people announced that the king of Bahrain is the first one responsible for Bahraini people’s execution and then stressed that Ayatollah Isa Qasim’s statement should be followed for standing against cruelty.

It should be mentioned that the leader of Bahraini Shiites, Sheikh Isa Qasim, issuing a statement, has asked Bahraini people to not surrender to oppression.

The Movement of Haq (Right):

The book “Companions of Imam Ali (AS)” was published in Najaf

0
0
Answer
Please spread the news of the religious scholars' comments longer and longer.
Thank you
Good luck
Please type in your comments in English.
The comments that contain insults or libel to individuals, ethnicities, or contradictions with the laws of the country and religious teachings will not be disclosed