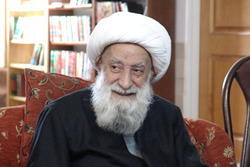 The commemoration ceremony of the 13th anniversary of Ayatollah Mirza Javad Tabrizi’s decease was held in Qom in the presence of scholars, teachers and students of Qom Seminary.

Ayatollah Muhammadi Araqi, the chairman of the supreme leader’s office in Qom attended this ceremony.

Some scholars, teachers and student of Qom and Najaf seminaries participated in the ceremony and commemorated the scientific and spiritual position of the late Ayatollah Mirza Java Tabrizi.

Besides, the representatives of some sources of emulation were present in the ceremony.

Hujjat al-Islam Neyshaboori spoke in the ceremony and stated, “According to Ahl al-Bayt (AS), the true science is composed of religion and jurisprudence and other sciences like chemistry and physics are virtues. The true learner is never fully satiated, as grand scholars such as Ayatollah Tabriz repeatedly said that they hadn’t stopped working and studying during their studies at the seminary.”