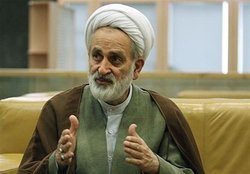 Rasa – Hujjat al-Islam Salek-Kashani described the United States as a symbol of terrorism in ‎the Middle East and in the world and called the IRGC “the most powerful and most deterrent ‎force in the world.”‎

RNA – In an exclusive interview with the parliamentary correspondent of the Rasa News ‎‎Agency, Hujjat al-Islam Ahmad Salek-Kashani, a member of the Cultural Commission in Iran’s ‎Islamic Consultative Assembly, referred to the designation of the Islamic Revolutionary ‎Guard Corps (IRGC) as a terrorist organization by the United States and said, “In its essence, ‎the United States is essentially a state terrorist.”‎
‎ ‎
The representative of the people of Esfahan in the Islamic Consultative Assembly added, ‎‎“The United States has committed many crimes over the past forty years against Iran and ‎other countries and for this reason, it can be said that the United States is the main cause of ‎terrorism in in the world and the region.”‎

Hujjat al-Islam Salek-Kashani‎ said the most important motivation for the United States to ‎designate the IRGC as a terrorist organization is to protect its own interests and said, “Under ‎the cover of fighting against terrorism, the arch-terrorist United States took these shameless ‎actions against Iran in order to achieve its goals and desires.”‎

His Eminence said, “By breaking the slogan of human rights, the United States violates its ‎founding principles and doesn’t respect the humanitarian interests of nations through bullying ‎on the global level.”‎

He added that in opposition to all international treaties and treaties, the American ‎government has designated a powerful, strong and deterrent armed force such as the IRGC ‎as a terrorist organization. ‎

‎“The American military is undoubtedly a terrorist organization,” he stressed.‎
‎ ‎
Hujjat al-Islam Salek-Kashani concluded, “By launching a proxy war, the United States ‎created Takfiri groups such as Daesh and the al-Nusrah Front to carry out their terrorist acts. ‎Therefore, the United States is a symbol of terrorism in the region and in the world.”‎

The United States officially designated the IRGC as a foreign terrorist organization, according ‎to a notice published in the United States Federal Register on April 15th. ‎