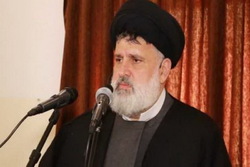 Rasa – ‎The head of the al-Fikr al-Amili Association of Lebanon ‎called for a national ‎agreement to support Lebanon against the intentions and threats ‎of the Zionist enemies.‎

RNA – In a speech delivered in the Grand Mosque of the southern Lebanese village of ‎Aynata, Hujjat al-Islam Sayyid Ali Abdul-Latif Fadhlullah called for a national policy which ‎strengthens the resistance option and supports Lebanon against the intentions and threats of ‎the Zionist enemies and to fortify the internal arena to confront the dictates of the United ‎States which is working to contain the Islamic Resistance and turn Lebanon into a victim of ‎its suspicious projects.‎

In this regard, the head of the al-Fikr al-Amili [Practical Thought] Association of Lebanon ‎emphasized on adherence to the national army and the Islamic Resistance [Hezbollah] and ‎strengthening of dialogue and internal peace.‎

Hujjat al-Islam Fadhlullah‎ condemned the killings, executions and bloodshed and said, “These ‎actions will lead to internal conflict and sedition and the weakening the front of the ‎opposition against the Zionist enemies.”‎

He stressed that the United States’ policy to impose a blockade and sanctions on Iran don’t ‎lead to the failure of the country in regard to development politics, economics and to ‎confront the projects of the imperialist powers.‎

The Society of Seminary Teachers of Qom’s response to US’ illegal action:‎

Vice-President of the Executive Council of Hezbollah:‎

The Zionist enemies are afraid of the Yemeni people

Association of Muslim Scholars of Lebanon‎‏:‏

We must strengthen Islamic unity ‎