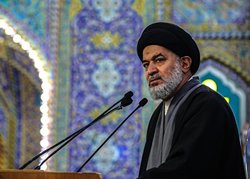 Rasa – Hujjat al-Islam al-Safi ‎warned against the collapse of the moral system in Iraq and ‎emphasized the need for attention to ethical issues.‎

RNA – During his Friday prayer sermon delivered to a large crowd of believers at the Holy ‎‎Shrine of Imam al-Husayn in the Iraqi city of Karbala, Hujjat al-Islam Sayyid Ahmad al-Safi ‎ ‎emphasized on the observance of ethical issues and said, “We must ring the alarm of the ‎collapse of some moral systems. Surprisingly, some feel embarrassed to deal with it and ‎nobody is thinking of such issues.”‎
‎ ‎
The representative of Grand Ayatollah Sayyid Ali al-Sistani ‎in Karbala added, “We are talking ‎about modesty and the factors and the problems of its disappearance. The observance of ‎modesty leads to decency, nobility and confrontation with shamelessness. Modesty makes it ‎such that people don’t exceed the limits of politeness and one is warned whenever someone ‎approaches immorality.”‎

Hujjat al-Islam al-Safi ‎added, “Young people, both men and women, have put modesty ‎aside under the pretext of freedom, while life without modesty will turn society into jungle. ‎With immodesty, society is obliterated and the young people are not ashamed of what they ‎are doing. Girls are the symbol of modesty and society must provide the context of moral ‎observance and not allow any violation of it.”‎
‎ ‎
The custodian of the Holy Shrine of Hadhrat Abbas ‎explained that some people are pushing ‎the country toward a state of endless turbulence and said, “Freedom has certain rules and ‎limits. It must protect society from moral collapse.”‎

He stated, “This society has scholars, intellectuals, youth and women who have defended ‎the country with courageousness and such people are a source of dignity and honour ‎which ‎must be introduced as a model.”‎

Hujjat al-Islam al-Safi ‎emphasized that they must be careful not to deceive us in the name of ‎freedom and to mislead society.‎