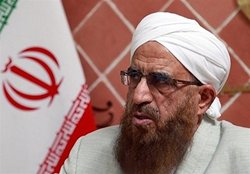 Rasa – The representative of Sistan and Baluchistan in the Assembly of ‎‎Experts‎ said ‎that no danger could force the nation to retreat and said, “The enemies were angry due ‎to their defeat by the Iranian nation and therefore, perpetrated the Khash terrorist ‎attack.”‎

RNA – In an exclusive interview with Rasa News Agency, Mawlawi Nazir Ahmad Salami, ‎‎the representative of the people of Sistan and Baluchistan province in the Assembly of ‎‎Experts, ‎condemned the terrorist attack on the Khash-Zahedan road and said, “When ‎the enemies saw that all of their goals in preventing the celebration of the fortieth ‎anniversary of the Islamic Revolution had failed, they were angry and carried out the ‎terrorist attack in Khash.”‎
‎ ‎
Emphasizing that the enemies will never achieve their goals by carrying out such ‎desperate actions, the Iranian Sunni cleric‎ said, “Our people, both Shi’ahs and Sunnis, ‎are aware and have political, intellectual and intellectual maturity. Therefore, the ‎enemies’ abject movements won’t be able to eliminate the unity and cohesion of the ‎‎[Iranian] nation and their bond to the system.”‎
‎ ‎
He stressed, “The enemies’ desperate ‎actions and blind terrorist crimes can never ‎undermine the will of the nation to protect and defend the Islamic Revolution.”‎
‎ ‎
Mawlawi Salami‎ pointed out that despite the hostilities of the arrogant powers, the ‎Iranian nation has continued on the path of advancing the goals of Islam and no ‎danger can compel it to retreat.‎

In conclusion, he emphasized the necessity of the officials to pay attention to the ‎statement of condolence issued by the Supreme Leader of the Islamic Revolution ‎‎[Ayatollah Khamenei] in the aftermath of the terrorist attack and said, “The judiciary ‎must help law enforcement agents, the IRGC, the unknown soldiers of the Imam of the ‎Time [Imam al-Mahdi] and other intelligence and security agencies to punish the ‎perpetrators of the Khash terrorist attack.”‎

On February 13th, an explosives-laden car rammed into a bus carrying the IRGC ‎personnel on ‎the road between the cities of Zahedan and Khash in Iran’s southeastern ‎Sistan and ‎Balouchestan province. The so-called Jaysh al-Adl Takfiri terrorist group ‎claimed ‎responsibility for the bombing.‎ At least 27 members of the IRGC were killed ‎and 13 were injured in the suicide bomb attack.‎