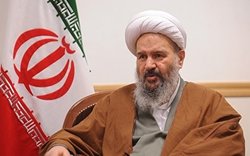 Ayatollah Namazi stated that the enemies are propagating unconventional mourning ‎rituals against Islam and added, “The effects of the abuses of the Shirazi and Wahhabi ‎movements against the Shi’ahs.”‎

RNA – In an exclusive interview of Rasa News Agency, Ayatollah Abdonnabi Namazi, ‎the representative of Supreme Leader of the Islamic Revolution [Ayatollah Khamenei] in ‎Kashan province, criticized the actions of some movements and groups in promoting ‎irrationality and the mourning Muharram and Safar rituals without observing hygienic ‎principles and said, “This is a rebellion against the correct customs and traditions that ‎have been passed down from different generations and some people have traditional ‎prejudices that are not compatible with some of the rules of shari’ah.”‎

Citing an example of incorrect mourning, he said, “Some traditional groups in Iraq ‎become unconscious during the days of mourning and not only do they chain and whip ‎themselves but also beat their children’s heads with whips and blood pours out of their ‎wounds.” ‎

He stated that the enemies and dissident media are abusing inappropriate methods of ‎mourning against Islam and clarified, “The enemies are abusing such behaviours and by ‎filming these behaviours, they are following the footsteps of Islam. They say in their ‎media reports that Muslims don’t have mercy on themselves nor upon their children.”‎

Emphasizing the need to raise awareness about the negative effects of inappropriate ‎methods of mourning against Islam and the Imams, Ayatollah Namazi added, “Those ‎who are acceptable and influential among these types of Muslims must speak, advise ‎and warn privately and inform them of the negative effects and propaganda of such ‎abuses against Islam and the Ahl al-Bayt.”‎

The representative of the people of Esfahan province in the Assembly of Experts of the ‎Leadership referred to the alignment of the Shirazi movement and Wahhabism and said, ‎‎“The effects of the abuses of both currents are against the Shi’ahs; Wahhabism is ‎hostile to the Ahl al-Bayt and the Shi’ahs but the Shirazi movement is harming the path ‎of friendship by pretending to follow the guardianship of Imam Ali and devoting itself ‎to the Purified Imams and mourning for Imam al-Husayn through friendship.”‎

While explaining a narration, he said, “Some are friends but don’t have the necessary ‎knowledge and awareness and the harm of their inappropriate behaviour goes back to ‎Islam and the Ahl al-Bayt. In a narration addressed to the lovers of the Ahl al-Bayt, it’s ‎said that ‘an ugly deed is uglier than anything else but if that ugly deed befalls you, it’s ‎disgraceful, and those who are our friends and do good deeds will receive more ‎rewards.” ‎

Ayatollah Namazi stated that there is a commonality between the actions of House of ‎Saud and some Shi’ahs, “There is a common ground between the House of Saud and ‎Shi’ahs who work against the Shi’ahs with their behaviour and the result of their ‎actions is equal.”‎

Representative of the Supreme Leader of the Islamic Revolution in Kashan:

The US is despondent and angry ‎with the progress of Iran

The representative of the Supreme Leader of the Islamic Revolution in Kashan: ‎

Dependence on US will not lead to immunity for Al Saud

Medicine and medical profession have a special place in Islam