Dependence on US will not lead to immunity for Al Saud 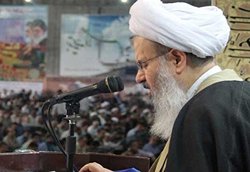 Rasa – Ayatollah Namazi emphasized that Saudi Arabia’s attachment to the United States and ‎Israel will never be a ‎source of immunity for the Al Saud.‎

RNA – In his Eid al-Fitr sermon in Kashan, Ayatollah Abdonnabi Namazi offered his ‎congratulations to the Muslim’s of the world and addressing the Al Saud, said, “The Al Saud ‎must learn from the fate of Mohammad-Reza Pahlavi and Saddam, otherwise they won’t ‎have a better fate than these two dictators.”‎
‎ ‎
The representative of the Supreme Leader of the Islamic Revolution in Kashan condemned ‎the King of Saudi Arabia’s accusations that of the Islamic Republic of Iran is interfering in the ‎region and said, “While the ruthless rulers of Saudi Arabia accuse Iran of interfering in the ‎affairs of the countries of the region, they themselves, with the help of the United States and ‎Israel, have been subjecting the oppressed Muslim people of Yemen to brutal bombardment ‎and are currently engaging in genocide in Yemen.”‎
‎ ‎
He emphasized that Saudi Arabia’s attachment to the United States and Israel will never be a ‎source of immunity for the Al Saud and said, “As long as Saudi Arabia enjoys a degree of ‎American support, which, in the words of Trump, is like a lactating cow.”‎
‎ ‎
Ayatollah Namazi pointed out that the marches on International al-Quds Day will gradually ‎become a global uprising and praised the glorious presence of the loyal people of Iran, ‎especially the people of Kashan, on this day and added, “On the last Friday of the month of ‎Ramadhan, the fasting people of Islamic Iran, with their epic presence in the marches on ‎International al-Quds Day created another epic, and were praised and honoured by the ‎Supreme Leader of the Islamic Revolution.”‎

His Eminence‎ pointed out that International al-Quds Day‎ has become a global phenomenon ‎and said, “In addition to the International al-Quds Day marches being held in Muslim ‎countries, they were also held in several European and American countries to support the ‎Muslim people of Palestine and in condemnation of Israel.”‎
‎ ‎
He offered his condolences on the death anniversary of Imam Khomeyni and the 15th of ‎Khordad Uprising and added, “Every day, the legitimacy of Islam and the Islamic Ummah ‎increases and the inclination of the youth of foreign countries to Islam and the popularity of ‎Islam in the United States increases and the Europeans also testify to this claim.”‎
‎ ‎
Ayatollah Namazi also emphasized on the institutionalization of the obligation of the ‎command of “enjoining the good the forbidding the wrong” in society and referred to the ‎necessity of organizing educational courses and justifications for the leaders of tourism in ‎Kashan and added, “The losses and disadvantages of neglecting the command of enjoining ‎the good the forbidding the wrong and the lack of its institutionalization in society, will be ‎noticed by the next generation.”‎