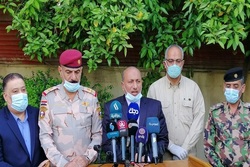 The governor of Iraq’s Karbala province said no pilgrims will be allowed into the holy ‎city of Karbala in the first ten days of the lunar Hijri month of Muharram.‎

RNA – The governor of Iraq’s Karbala province said no pilgrims will be allowed into the holy ‎city of Karbala in the first ten days of the lunar Hijri month of Muharram.‎

No Iraqi or foreign pilgrims can enter the city on these days, especially on the 9th and 10th ‎of Muharram which mark Tasu’a and Ashura, Nasif al-Khattabi said.‎

He said the city will be closed until the 13th of Muharram, adding that any gatherings of ‎people will be banned, al-Sumaria News reported.‎

Anyone who calls for holding gatherings will be referred to the judiciary, al-Khattabi warned.‎

‎“We are in extraordinary conditions (given the Coronavirus outbreak),” he said, stressing the ‎need for commitment to preventive measures and social distancing.‎

Shi’ah Muslims around the world mourn the martyrdom of Imam al-Husayn, Sayyid al-‎Shuhada (the Master of the Martyrs), in Muharram.‎

The third Shi’ah Imam (AS) and a small group of his followers and family members were ‎martyred by the tyrant of his time – Yazid ibn Mu’awiyah, in the battle of Karbala on the ‎tenth day of Muharram (known as Ashura) in the year 680 AD. ‎

The Coronavirus outbreak that originated in Wuhan, China, has infected over 18 million ‎people around the world and killed more than 689,000.‎

The outbreak has had a major impact on global sporting, cultural, religious and political ‎events, with a host of events canceled or postponed.‎

Member of the Faculty of Social Sciences at Baqir al-Uloum University: ‎