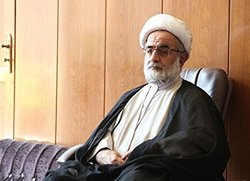 The head of Tehran’s Marvi Seminary explained the greatness of Arafah and the importance ‎of using this capacity, considered the creation of distance between the believers and the ‎humanizing resources as one of the tricks of the enemies.‎

RNA – In an exclusive interview with Ayatollah Mohammad-Baqer Tahriri, the head of ‎Tehran’s Marvi Seminary, referred to the Supplication of Arafah, which is recited on the ninth ‎day of the month of Dhu al-Hijjah, said, “It’s necessary to pay attention to the greatness of ‎night and day of Arafah. God Almighty always loves His servants and wants good for them ‎wants His servants to be connected only with His absolute perfection and to move toward ‎Him to express their needs only to Him because the dignity and perfection of man is the fact ‎that he understands that a needy creature has a purpose. It has a lofty and wide spiritual ‎range that can communicate with the absolute divine perfection.”‎

The revered teacher in the Islamic Seminaries emphasized that the month of Dhu al-Hijjah is ‎also considered as one of the special times and special virtues have been mentioned for the ‎first ten days of this month and added, “Of course, these ten days coincide with the month ‎of Dhu al-Qa’dah, which is a period of forty days. According to the promise that God ‎Almighty made to one of the Ulu al-Azm (Resolute Prophets), Prophet Moses, in these forty ‎days, the servant will make a series of preparations so that he can have those strong ‎relations with the divine essence and receive news from that divine realm. Thus, these forty ‎days have found an honour that is also mentioned in the Holy Quran.”‎

He said, “With these preliminaries, God Almighty has made the practice of Hajj, which is one ‎of the actions which bring one close to God and has spiritual, social and political aspects, ‎obligatory for the believers who are able to do it once in their lifetime. Of course, those who ‎performed the obligatory Hajj at least once, if they have the financial means and physical ‎ability and other necessary conditions, can perform this act again as recommended and Hajj ‎al-Tamattu’ [joy of Hajj] will be recorded for them.”‎

Ayatollah Tahriri stated, “Hajj al-Tamattu’ is also an action that is performed at a specific ‎time and place, the actions of which express a kind of expression of submission and love for ‎the existence of God. In these acts, there are movements such as circumambulation of the ‎house of God [the Ka’bah], the obligation of performing the salat al-tawaf (prayer of ‎circumambulation) and there are also prayers that are also performed on the Day of ‎Arafah.”‎

His Eminence said “God Almighty has commanded the pilgrims to gather in the Valley of ‎Arafat, which is located in a part of the land of Makkah, and express their secrets and needs ‎to the Lord. Almost the first, most complete and broadest gathering that must be formed ‎with its own special conditions is the Day of Arafah, where all pilgrims are obliged to attend ‎the gathering of Arafah on the Day of Arafat and engage expressing their secrets and needs. ‎Therefore, the Supplication of Arafah of Imam al-Husayn with such preparations is ‎expressed in the Valley of Arafat.”‎

In other remarks, he said, “Today we see how the call and truth-seeking discussions of the ‎Islamic Republic of Iran are being raised in the world and when the teachings of religion ‎reach the farthest parts of the words, how Christians, Jews and Buddhists who seek the truth ‎will fall in love with the pure teachings of Islam and accept it when they hear this call.”‎

Ayatollah Tahriri emphasized, “After the Islamic Revolution, students of the Ahl al-Bayt came ‎to Iran from 120 countries. Today, they are learning this knowledge in al-Mustafa ‎International University community. At present, some of these people, who became ‎acquainted with the school of Ahl al-Bayt, accepted and understood the sweetness of this ‎knowledge, are engaged in propagating this knowledge in countries around the world, ‎including the United States, the Netherlands, Africa, etc. On this basic, the teachings of the ‎Quran and Ahl al-Bayt aren’t limited to Islamic countries or Saudi Arabia, where the Holy ‎Quran was revealed, but these are universal teachings.”‎

The Supplication of Arafah of Imam al-Husayn is one of the prayers that Shi’ahs recite on ‎the Day of Arafah in the desert of Arafat and other parts of the world. This prayer contains ‎mystical and ideological teachings. ‎