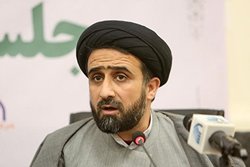 Hujjat al-Islam Hashemian said, “The phenomenon of ‘fire at will’ arises when we ‎encounter inefficiencies and management deadlocks in the formal structures of the ‎country’s cultural management.”‎

RNA – In an exclusive interview with Rasa News Agency, Hujjat al-Islam Dr. Sayyed ‎Mohammad-Hoseyn Hashemian, a professor and lecturer at Baqir al-Ulum University in ‎Qom, referred to the metaphor of “fire at will,” and said, “‘Fire at will’ has Quranic roots ‎at its disposal. God Almighty says in the holy verse, ‘Say, ‘I give you just a single ‎advice, that you rise up for God’s sake, in pairs or singly’ [34:46].” ‎

He added, “This command of God Almighty in the Holy Quran implies that the believer ‎must not, under any circumstances, stand idly by in the face of social, cultural and ‎political structures and systems and become passive, even if these structures are ‎tyrannical and against monotheism and the word of God, the monotheist is obliged to ‎confront according to this verse.” ‎

Emphasizing on standing up and countering the enemies’ attacks, Hujjat al-Islam ‎Hashemian stated, “The metaphor of ‘fire at will’ has exactly the same meaning, and the ‎young revolutionary and religious believer cannot remain silent in the face of the ‎onslaught of global arrogance against the Islamic Revolution and the pure ‎Muhammadan Islam that he pursues through social, cultural, political and economic ‎structures.” ‎

Explaining the obvious pattern of fire in the society, he clarified, “In my opinion, Martyr ‎Qasem Soleymani is a very perfect model for all the cultural forces of the Islamic ‎Revolution because he incorporated all the features and characteristics of firepower at ‎his disposal. One of the most important characteristics that every fire force needs at his ‎disposal is sincerity and piety in practice.”‎

In conclusion, Hujjat al-Islam Hashemian explained the concept of ‘fire at will,’ “The ‎phenomenon of ‘fire at will’ arises when we encounter inefficiencies and management ‎deadlocks in the formal structures of the country’s cultural management. Therefore, ‎managers must not be expected to interfere, and we must ask managers not to have ‎anything to do with these issues, not to hinder the creation and exit from many things, ‎and in many areas, young people must be trusted and overcome this structural and ‎organizational point of view.”

A brief introduction in to the life of Imam al-Baqir ‎

Member of the Faculty of Social Sciences at Baqir al-Uloum University: ‎