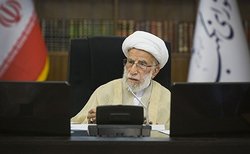 The secretary of the Guardian Council said, “The tearing down of statues and symbols ‎in the United States sends a clear message to the American people and the world that ‎the decline of the Great Satan has come and the people of the world have realized the ‎true face of the United States.” ‎

RNA – The June 24 meeting of the Guardian Council was held in the presence of ‎jurisprudents and lawyers, chaired by Ayatollah Ahmad Jannati, the Secretary of the ‎Guardian Council.‎

At the beginning of the meeting, Ayatollah Jannati commemorated the martyrdom ‎anniversary of Ayatollah Mohammad Beheshti, a revered Iranian jurist, philosopher, ‎cleric and politician, and offered his congratulations on Judiciary Week and said, “The ‎judiciary is the refuge of the people in the realization of justice. If it can take a ‎fundamental step in the fight against corruption, the restoration of public rights and ‎the supervision of the proper implementation of laws, a judicial transformation will take ‎place and we will see more satisfaction from the people and the Supreme Leader of the ‎Islamic Revolution [Ayatollah Khamenei].”‎

In another part of his speech, His Eminence referred to the upcoming American Human ‎Rights Week, said, “The record of the various American administrations is full of crimes ‎against humanity that don’t recognize race, religion and nationality. Obvious examples ‎of this are evident in Vietnam, Hiroshima, Palestine, Yemen, Iraq, Afghanistan, Syria, ‎and so on.”‎

He described the United States’ enmity toward the Iranian people as having a seventy-‎year history and added, “From the coup d’état of 1953 until the of General Qasem ‎Soleymani, we have witnessed several cases of hostility and violations of the covenant ‎of American governments, the aim of which was to put pressure on the people and ‎force the Iranian people to surrender. Thanks to God and the guidance of the Supreme ‎Leader and the resistance of the people, they have failed in this goal.”‎

Referring to widespread anti-racism protests in the United States and elsewhere, ‎Ayatollah Jannati said, “African-Americans in the United States have always been under ‎pressure and oppression and this discrimination and racism has recently intensified to ‎the point where it is no longer tolerated by the American people and around the world ‎and has led to rallies against the American claim of human rights.”‎

He added, “The brutal killing of African-Americans is another sign of American human ‎rights, and the tearing down of statues and symbols in the United States sends a clear ‎message to the American people and the world that the decline of the Great Satan has ‎come and the people of the world have realized the true face of the United States.”‎

Emphasizing the anti-American spirit of the Iranian people through the years before ‎and after the Islamic Revolution, Ayatollah Jannati noted, “The slogan of ‘down with ‎America’ by the people of Iran, which has always continued since the beginning of the ‎Islamic Revolution, is a source of pride for the people and a sign of the people’s ‎independence and dignity and this must be kept alive. With the advent of Imam al-‎Mahdi, we will witness the dismantling of oppression and crime throughout the whole ‎world.”‎

Secretary of the Guardian Council:‎