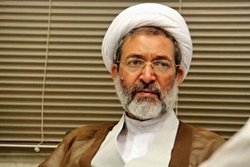 The head of the sociopolitical bureau of the Islamic Seminaries of Iran considered the ‎presentation of the authentic Islam of civilization as the first art of Imam Khomeyni and ‎said, “The first major step that the late Imam took was that between the two secular and ‎dogmatic views was that the authentic civilization-building Islam can be presented. ‎

RNA – In an exclusive interview with Rasa News Agency, Hujjat al-Islam Mohammad-Hasan ‎Zamani, the head of the sociopolitical bureau of the Islamic Seminaries of Iran, explained ‎that the founder of Iran’s Islamic Revolution, Imam Khomeyni, played a role in presenting a ‎new interpretation of Islam and said, “The role that the late Imam played in the Islamic ‎Revolution has been seen in several areas; the first area was in presenting a new, ‎comprehensive and authentic interpretation of Islam. Before him, two interpretations of ‎Islam were common in the world community of Islam and Iran – one, a secular and ‎Westernized version of Islam, and the other, a fundamentalist and intolerant version of ‎Islam.”‎

Referring to the perspective of secular Islam, His Eminence said, “Secular Islam means that ‎a group of Muslims have concluded that many of the precepts of Islam date back to ‎fourteen centuries ago and to the environment of the Arabian Peninsula and aren’t applicable ‎today and today, Islam can’t become a social system and enforce all the rules. They decided ‎to commit only to the religious affairs of Islam and in the matter of legislation, they borrow ‎the laws of their countries from Western governments that have legislative experience.”‎

He stated, “This is why before the Islamic Revolution, the constitutions of Iran and other ‎Islamic states were borrowed from Western governments, and they believed that Islamic ‎didn’t have anything to speak about regarding the humanities, including psychology, ‎jurisprudence and the issues of the modern world and these issues should be borrowed from ‎scientists around the world.”‎

Hujjat al-Islam Zamani cited the Taliban, Wahhabism and al-Qaedah as examples of ‎fundamentalist Islam and said, “The second interpretation of Islam is fundamentalist Islam. ‎In this sense, some believe that the Islamic rules should be implemented and that there ‎should be no trade-offs with today’s academic disciplines, and that the Taliban, Wahhabism, ‎and al-Qaedah can be considered symbols of this trend.” ‎

He added, “The Imam said that while all Islamic rules are applicable and by using the ‎element of ijtihad, it can be applied to new issues. We are proud to announce that the ‎Quran and hadiths have the best rules in various fields of psychology, sociology and ‎management, and can compete with the greatest scholars of all Western and Eastern ‎schools, and Islamic teachings are beyond those schools.”‎

Referring to the design of the model of Wilayat al-Faqih (Guardianship of the Jurisprudent) ‎by the Imam, Hujjat al-Islam Zamani added, “Imam Khomeyni did a very delicate job of ‎designing the software and presenting a model called Wilayat al-Faqih which is why he ‎appointed the Guardian Council not to pass even one law which goes against Islam. Also, ‎with this design, he gave popular sovereignty in all areas, from the election of the Supreme ‎Leader of this system to the president, representatives in the Islamic Consultative Assembly ‎and members of the Assembly of Experts of the Leadership and the Islamic council of the ‎cities etc.”‎