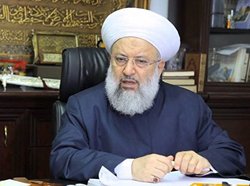 The Lebanese Sunni scholar stated that Imam Khomeyni reformed the theory of political Islam ‎and gave a new identity to the Islamic ummah.‎

RNA – In an exclusive interview with Rasa News Agency, Shaykh Maher Hammoud, the ‎chairman of the International Union of Resistance Scholars in Lebanon, referred to the death ‎anniversary of Imam Khomeyni, the leader of Iran’s Islamic Revolution, said, “The late ‎Imam’s political thought is a distinct thought and a prominent feature of his personality is ‎courage.”‎

The senior Lebanese Sunni scholar continued, “Imam Khomeyni’s thought played an ‎important role in the unity of the Islamic ummah and its cohesion and all Muslims need his ‎political slogans, which were reflected in his positions against the United States and the ‎Zionist regime, which this cancerous tumour knows and it must be destroyed.”‎

Shaykh Hammoud added, “Imam Khomeyni considers Muslims as a powerful nation and ‎considers resistance as the only way to get rid of the domination of arrogant powers. If ‎Muslims follow his advice, the reality of the Islamic world will be different but unfortunately, ‎most Arab rulers turned to sectarianism and the dictates of the United States because they ‎owe their thrones to Washington.”‎

Referring to Saddam’s imposed war on Iran [Iran-Iraq War], he said that Arab countries ‎supported the war under false pretenses, such as supporting the Sunnis, thus creating ‎obstacles to the implementation of Imam Khomeyni’s recommendations among Muslims.‎

Shaykh Hammoud noted that Imam Khomeyni chanted slogans that reformed the theory of ‎political Islam and gave a new identity to the Islamic ummah and said, “The Islamic ‎Resistance Axis in the region must be freed from the accusations of leftists that it agreed ‎with the United States because it chanted ‘America is the Great Satan’ and made everyone ‎aware of the correct movement of the Islamic Resistance against the Westerners.”‎

Chairman of the International Union of Resistance Scholars:‎

Syria brought the US, Arab countries to their knees