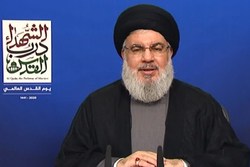 ‎“Today in the year 2020, and despite all the international and regional transformations and all ‎the storms, earthquakes and sedition that have stricken our region, and due to the faith, ‎resilience, patience, honesty, loyalty and communication among the nations and forces of ‎the axis of resistance in our Arab and Islamic world, we find ourselves closer than ever to ‎Jerusalem and to, God willing, its liberation,” Nasrallah said in a televised address marking ‎International al-Quds Day.‎

Every year, millions of Muslims hold demonstrations worldwide to underscore the plight of ‎Palestinians, heeding a call by the late founder of the Islamic Republic, Imam Khomeyni, who ‎designated the last Friday of every Ramadan as the International al-Quds Day.‎

He added, “The real scene upon which any interpretation, vision or evaluation of the future ‎must be based is the firmness, resilience, rise and growth of the resistance forces -- be them ‎governments, nations, factions, movements, peoples or elites -- in Palestine, Iran, Iraq, ‎Syria, Yemen and Lebanon, and across our Arab and Islamic world.”‎

‎“The real scene is being reflected by the statements and stances of the Zionist officials, who ‎are scared and terrified by the victories of the axis of resistance and are stunned and ‎disappointed by the defeat of their allies and America’s allies on several fronts and in several ‎wars and confrontations in our region,” Nasrallah went on to say, Naharnet.com reported. ‎

He also noted that Israeli officials “are clearly expressing their extreme concern over the ‎growth of the resistance’s capabilities as to quantity, quality, manpower, armament, ‎technical expertise, morale and every other aspect.”‎

‎“We in Hezbollah, in the Islamic Resistance in Lebanon, stress our firm commitment to this ‎‎(Palestinian) cause and pledge that we will carry on this path, alongside our patient, ‎aggrieved, besieged and Mujahid Palestinian people,” Nasrallah added.‎

He pointed out that “the sacrifices and patience of the mujahideen and resistance fighters ‎and our peoples, men, women, youngsters and elders will change all equations.”‎

Recalling Iran’s top anti-terror commander Lieutenant General Qasim Soleymani who was ‎killed in a US drone strike in Iraq earlier this year, Nasrallah pledged to honor him through ‎‎“continuing this path, exerting every effort, removing every obstacle, closing ranks, uniting, ‎showing solidarity, preparing all circumstances and paving the way for the day, which will ‎certainly come, in which we will all pray in Jerusalem (al-Quds).”‎

‎“al-Aqsa Mosque will be liberated by the arms and blood of our nation’s loyal sons,” he said.‎