Cancellation of religious and spiritual gatherings to save lives: A threat or an opportunity? 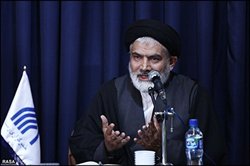 The Friday prayer leader of Pardisan referred to the temporary cancellation of religious and spiritual gatherings such as Friday prayers and itikaf due to the Coronavirus outbreak.

RNA – In a lecture, Ayatollah Sayyed Samsamoddin Qavami, the head of the Jurisprudence Institute of Islamic Management, offered his congratulations on the birth anniversary of Imam Ali and said, “Imam Ali is the symbol of the pure Islamic government of the Prophet Muhammad and the Ahl al-Bayt. He is also the leader of the pious and also the Commander of the Faithful.”

In another part of his remarks, the Friday prayer leader of Pardisan, Qom referred to the current situation in Iran and said, “In the years after the Islamic Revolution, we were always used to taking part in itikaf (retreat) during the ‘white days’ of the month of Rajab and using the unique blessings of these days but this year, due to an important sacred commandment, itikaf won’t take place.”

Ayatollah Qavami noted, “The Coronavirus has spread and is threatening gatherings, so we won’t hold itikaf gatherings this year. This is while at least one million people, who were often youths, participated in the itikaf gatherings of the past few years and the heavenly and beautiful scenes were marked.”

His Eminence continued, “Friday prayers are more important than itikaf but we cancelled the most important and dearest gatherings for the sake of a superior and important interest, namely the preservation the health and lives of people. Today, if emptied gatherings are sacred and aren’t considered threatening, the sign is that the people are adherent to the system that brings together their materiality, spirituality, religion and world.”

He said, “The people’s adherence with the system is upsetting for the enemies and we will continue this process. Soon this devious virus will fall apart, just as Ayatollah Khamenei said. The national headquarters is like a war base where the IRGC, the army, the three forces and the whole system came together to defeat the Coronavirus in a united manner.”

Ayatollah Qavami added, “We must fulfill our duties, the Coronavirus will soon be defeated and we will be proud. We hope to be in the presence of the dear people in Friday prayers soon.”