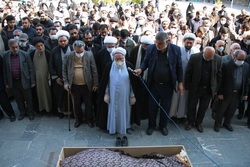 Ayatollah Mohsen Habibi has passed away due to the Coronavirus.

RNA – The deepening COVID-19 or coronavirus crisis in Iran continues to take the lives of prominent Iranian political and religious leaders.

Ayatollah Mohsen Habibi, the trustee of the Seminary of Ayatollah Ahmad Mojtahedi in Tehran passed away due to Coronavirus on March 5th at the age of eighty-one years.

He was born in Tehran, Iran into a religious family. After finishing his initial studies, he gained admission in the Seminary of Ayatollah Ahmad Mojtahedi and completed his Intermediate (Sutuh) studies therein.

Ayatollah Habibi also played in important role during the struggle for the Islamic Revolution of Iran and survived numerous attempts on his life.

It is also worth mentioning that he was the son in law of Ayatollah Sayyed Ebrahim Khosroshahi. His body was transferred to Ray and after funeral prayers led by Ayatollah Hoseyn Osati, he was buried in the courtyard of the Holy Shrine of Sayyed Abdul-Azim Hasani.