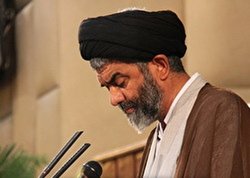 RNA – In an exclusive interview with Rasa News Agency, Hujjat al-Islam Mohsen Sa’idi, the representative of the people of Ilam province in the Assembly of Experts, stated that statement on the Second Step of the Islamic Revolution by the Supreme Leader of the Islamic Revolution [Ayatollah Khamenei] is in fact based on the principles of pure Muhammadan Islam and, “These principles are in accordance with the nature of man and the rationality and ethics of humanity.”

His Eminence said, “It’s such great a statement that we must consider it a divine blessing that it flowed into the heart of the Supreme Leader. Therefore, understanding its depth requires that scholars of the Islamic Seminaries and universities strive hard.”

He explained the overall statement of the Second Step of the Islamic Revolution, stating, “This statement looks at the past where we were and looks at the current situation where we came from and then looks at the future of the direction we should move in and with what quality.”

Hujjat al-Islam Sa’idi emphasized the importance of the role of Wilayat al-Faqih [Guardianship of the Jurisprudent] in the Second Step of the Islamic Revolution and added, “An appendix should be made to this statement. The Supreme Leader didn’t emphasize this central role for the sake of the danger of the definition and that role is the unequivocal role of Wilayat al-Faqih in organizing the previous step and realizing the next steps.

Referring to the role of Wilayat al-Faqih in the successes of the Islamic Revolution, His Eminence said, “This central role is the most important factor in the past, present and future steps. On this basis, we believe that the high percentage of these successes is due to the most significant blessings of the Islamic Revolution – the unprecedented role of Wilayat al-Faqih.”

He said, “As other nations have repeatedly said that the success of your system and revolution is due to the existence of Wilayat al-Faqih, even a high percentage of the people’s support is due to the insight and guidance that the Supreme Leader injects into society.”

Hujjat al-Islam Sa’idi noted, “The role of Wilayat al-Faqih must be added as an appendix to this statement and it’s important that this role be highlighted in the statement of the Second Step of the Islamic Revolution.”

Tags: Saidi Wilayat al-Faqih Iran
Short Link rasanews.ir/201svI
Share
1
Please type in your comments in English.
The comments that contain insults or libel to individuals, ethnicities, or contradictions with the laws of the country and religious teachings will not be disclosed