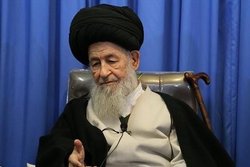 RNA - In a statement on Tuesday, Ayatollah Alavi Gorgani deplored the situation facing the Indian Muslims, and said that unfortunately, news coming from India and religious discrimination against Muslims after US president's visit to the country is worrisome.

"Attacking Muslims, killing them, forcing them out of home torments hearts of all free people. Unfortunately, all the catastrophes take place at a time when the international community which is claiming to be advocating human rights is watching in silence and this reveals their human rights claims are false," the Ayatollah said.

"I condemn such behaviors towards Indian Muslims and stress the need for the country's officials to reconsider their means," he said, noting that all the free people and international circles pressure India to prevent a human catastrophe in India.

Based on the Indian government's Citizenship Amendment Act, all nationals from other countries can attain citizenship except Muslims.

By smoothing the path for all non-Muslim immigrants from adjoining countries to attain citizenship, the law paves the way for Muslims to be unfairly disadvantaged when seeking to immigrate to India.

Iranian Foreign Minister Mohammad Javad Zarif on Monday condemned a recent outburst of violence against Indian Muslims, urging New Delhi to protect all of its citizens regardless of their faith and ethnicity.

Earlier, on Monday, Iranian Foreign Ministry Spokesman Seyed Abbas Mousavi voiced his country’s serious concern about the rising atrocities against Muslims in India, adding that Tehran is consistently following up the case.

The worst anti-Muslim violence by Hindu nationalists began on the eve of a state visit by US President Donald Trump, infamous for his anti-Muslim rhetoric and policies.

According to Fars News Agency, a police statement on Saturday, however, came without elaborating on whether the detainees were perpetrators of deadly violence on mosques and ordinary Muslim residence or Muslims defending their homes against indiscriminate attacks by Hindu nationalists with little intervention by police officers and other government security forces.

World Forum of the Islamic Ummah: