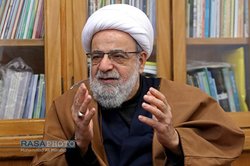 A member of the Society of Seminary Teachers of Qom said that people must choose representatives to the Islamic Consultative Assembly who seek to serve and don’t seek to betray the country and the nation.

RNA – In an exclusive interview with Rasa News Agency, Ayatollah Najmoddin Tabasi, a member of the Society of Seminary Teachers of Qom, emphasized the necessity for the widespread participation of the people in the February 21st legislative election in Iran and said, “The people must feel a sense of duty in relation to their presence at the ballot boxes and mark the fate of the system.”

He stated that throughout the history of the Islamic Revolution, our people have proven that they stand for the system, “In different periods, the people have shown that despite the problems, hardships and economic problems, they will not give up their system and will support it.”

Ayatollah Tabasi said that the enemies are eying the size of the people’s presence in the election arena and have plans based on the presence of the people and emphasized, “The enemies lower the reported number of people who turnout at the elections to convey their indifference toward the Islamic Revolution and the system and then move forward to harm the country on this basis.”

His Eminence said that the enemies have always been disappointed by the widespread presence of people in different arenas and emphasized, “I consider the election as a national and religious duty. Our Iranianness and Islamism demand that we be present at the ballot box and frustrate the enemies more than ever before.”

Ayatollah Tabasi considered the root of the country’s problems to be some traitorous and ineffective officials and said, “Today, the enemies have entered the arena with all of their might to get us out of the arena. Therefore, we must send representatives to the parliament who are sympathetic to the country and the people and who fear the threat of the West, not those whose bodies are in Iran and their minds and hearts are in Europe and the United States.”