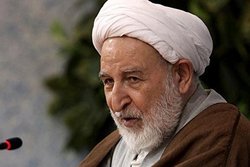 Ayatollah Yazdi said, “The formation of an Islamic Union can present the religion of Islam to the world in an extraterritorial way and in this way the role of lecturers in the Islamic Seminaries can be decisive.”

RNA – Hujjat al-Islam Hamid Shahriyari, the secretary-general of the World Forum for Proximity of Islamic Schools of Thought and the vice-president of Statistics and Information Technology of the Judiciary, met with Ayatollah Mohammad Yazdi, the head of the Society of Seminary Teachers of Qom.

He also described the role of Wilayat al-Faqih (Guardianship of the Jurisprudent) as the axis and intellectual basis for fostering and promoting Islamic unity by saying, “When all Muslims have a common enemy, one can combat the enemies with a united Islam and geographical boundaries won’t prevent this.”

The head of the Society of Seminary Teachers of Qom appreciated the efforts made during Hujjat al-Islam Shahriyari’s term at the Computer Science Research Centre of Islamic Sciences – Noor and at the Judiciary, and wished him greater success at the World Forum for Proximity of Islamic Schools of Thought and said, “The formation of an Islamic Union can offer the religion of Islam to the world, which is extraterritorial, and in this way the role of the teachers of the Islamic Seminaries can be decisive.”

At the beginning of this meeting, Hujjat al-Islam Shahriyari referred to the establishment an Islamic Union and described the establishment of this institution as a step toward strengthening and developing the unity of the Islamic ummah and by explaining the aspirations of the late Imam Khomeyni and the intentions of the Supreme Leader of the Islamic Revolution, Ayatollah Khamenei, on the necessity of disseminating the extra-geographical thinking of Muslim countries on the basis of the “unity of the Islamic ummah.”