Ayatollah Tabarsi has passed away 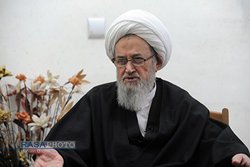 Ayatollah Nourollah Tabarsi passed away today after suffering a period of illness.

Ayatollah Tabarsi had served for many years as the Friday prayer leader of Sari and the former representative of the Supreme Leader in Mazandaran.

He had recently resigned due to illness.

A close associate of Ayatollah Tabarsi confirmed the death of this renowned scholar in an interview with Rasa News Agency.

His Eminence was born in April 1940 in the village of Suchelma, Neka County, Mazandaran.

Rasa News Agency offers its condolences on the death of this warrior and wishes patience to his family.

Tags: Tabarsi Death Iran Mazandaran
Short Link rasanews.ir/201smd
Share
1
Please type in your comments in English.
The comments that contain insults or libel to individuals, ethnicities, or contradictions with the laws of the country and religious teachings will not be disclosed