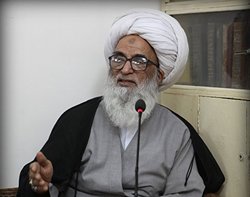 The revered source of emulation said that the members of the Popular Mobilization Forces are the children of the Shi’ah religious authorities and stated that with the help of these members, Iraq was victorious.

RNA – A group of members of Iraq’s Popular Mobilization Forces met with Ayatollah Bashir al-Najafi in the holy city of Najaf.

The revered source of emulation said during the meeting that the members of the Popular Mobilization Forces were the sons of the Shi’ah marja’iyyah (religious authorities) and that Iraq was victorious through them.

He emphasized that with the help of members of the Popular Mobilization Forces we were able to defend the sanctities and the Iraqi people.

In conclusion, Ayatollah al-Najafi appealed to God Almighty to protect Iraq and its people from any sedition and conspiracy and called for the preservation of unity.