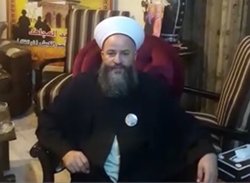 Shaykh al-Kabash said, “The Deal of the Century will only increase the Palestinian people’s resolve in the face of the regime occupying al-Quds (Jerusalem).”

RNA – In an exclusive interview with Rasa News Agency, Shaykh Khidhr al-Kabash, a member of the Movement for the Advancement of Lebanon, referred to the plan of compromise known as the “Deal of the Century,” and said, “The fate of the deal would be just like all agreements and plots that have been in place from the beginning of the occupation of Palestine until the present day because the Deal of the Century was dead on arrival.”

The Lebanese Sunni cleric added, “The confrontation of the Palestinians is on the path to marking a victory against the Zionist regime and today, the Gaza Strip is in an offensive position and is responding to every Zionist aggression. The Islamic Resistance Axis has focussed on retaliation against the enemies. Just as we saw in the Iranian response to the assassination of Martyr Qasem Soleymani, it was not long after the American bases were hit by ballistic missiles.”

He noted, “The Deal of the Century has been offered to destroy the Palestinian cause but everyone knows that this deal will only increase Palestinian resolve in the face of the regime occupying al-Quds (Jerusalem).”

Shaykh al-Kabash added, “The Deal of the Century was followed by the assassination of the martyrs of the resistance, Abu al-Ata and Lieutenant General Qasem Soleymani, but the United States knows that killing of the leaders of the Islamic Resistance Axis can’t cause it to back down from its position.”

On January 28, 2020, the President of the United States Donald Trump unveiled his anti-Palestinian and anti-Islamic plans for his alleged peace deal called the “Deal of the Century” in the presence of Israeli Prime Minister Benjamin Netanyahu, which received a great deal of response from various countries around the world. The ceremony was also attended by the ambassadors of three Arab Gulf states, namely the United Arab Emirates, Bahrain and Oman.

Trump announced that the Palestinian city of al-Quds (Jerusalem) will remain the unified capital of the Zionist regime and said, “it is time for the Islamic states to officially recognize Israel that came into existence in 1948.”