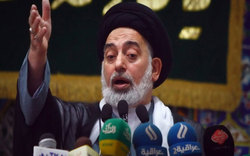 Hujjat al-Islam ‎‎‎al-‎Qubanchi said, “The American military must wait for the powerful blows of ‎the Popular Mobilization Forces and from now on they will not even find a place to sleep in ‎Iraq.”‎

RNA – In his Friday prayer sermon delivered to a large and fervent crowd of believers in the ‎‎Iraqi city of Najaf’s Fatimah al-Kubra ‎Husayniyah, Hujjat al-Islam Sayyid Sadruddin al-‎‎Qubanchi said that with the assassination of Qasem Soleymani, Abu Mahdi al-Muhandis and ‎their companions, the world has entered a new phase and United States has waged a ‎widespread war through this crime.‎

The Iraqi Shi’ah scholar continued, “The American military must wait for the powerful blows ‎of the Popular Mobilization Forces and from now on they will not even find a place to sleep ‎in Iraq.”‎

He continued, “Everyone saw how the blood of Iranians and Iraqis mixed together with the ‎martyrdom of Major General Soleymani, Abu Mahdi al-Muhandis and their companions in the ‎land of Imam al-Husayn.”‎
‎ ‎
Hujjat al-Islam ‎‎‎al-‎Qubanchi noted, “Patience and diplomatic relations are essential to ‎achieving goals but martyrdom is the only way to ensure that all the requirements are met to ‎meet the goals.”‎

His Eminence added that the assassination of Major General Soleymani and Abu Mahdi al-‎Muhandis and their companions is an outright violation of all international law, a crime which ‎is in fact a violation of Iraqi sovereignty.‎

He added, “I express my condolences to the people of Iran and Iraq, and I emphasize that ‎Major General Soleymani was the number one planner of the Iraqi army’s final victory over ‎Daesh and that the Iraqi people will remain loyal to those who stood by them.”‎
‎ ‎
On the morning of Friday, January 3rd, it was reported that Major General Qasem Soleymani, ‎the commander of the Quds Force of Iran’s Islamic Revolutionary Guards Corps (IRGC), and ‎Abu Mahdi al-Muhandis, the second-in-command of Iraq's Popular Mobilization Forces, have ‎been killed in American airstrikes in the Iraqi capital Baghdad.‎