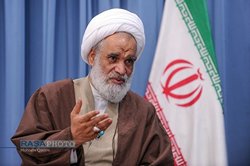 The ‎representative of Khuzestan in the Assembly of Experts said, “In Islam, the goal isn’t to ‎gain power – power is a means of material and spiritual service and securing the religion and ‎material world of the people.”‎

RNA – In a meeting with the students of Tehran’s Dar al-Salam Seminary held at the Imam ‎Khomeyni Educational and Research Institute in Qom, Ayatollah Abbas Ka’bi, the ‎‎representative of the people of Khuzestan province in the Assembly of Experts, referred to ‎the importance of religious propagation and missionary work based on the Holy Quran, ‎saying, “By using the Holy Quran and a sense of responsibility, intelligence and insight, ‎Shaykh Ibrahim Zakzaky was able to invite many young people to religion and to Islam [in ‎Nigeria].” ‎
‎ ‎
The member of the Assembly of Experts said. “Today, international propagation, the ‎expression of Islamic truths in the language of intuition and the worldwide dissemination of ‎the message of Islam are among the needs of the Islamic Seminaries today.”‎
‎ ‎
He stated, “Today, solving world problems and facing global difficulties, such as the ‎insecurity crises, morality crises, family crises, the crises of poverty, class discrimination, ‎injustice, global oppression and criminal action, result from the hegemonic and arrogant ‎system. This can be realized through the rebuilding of the Islamic ummah and the guidance ‎of the divine leadership and the discourse of Islamic Revolution and the Islamic Resistance.”‎
‎ ‎
Ayatollah Ka’bi said, “The problems of humanity at the global level are rooted in the ‎tyrannical rule of the United States and international Zionism. The Islamic Revolution was the ‎light that shone on the contemporary world to remove the oppression and darkness of ‎modern ignorance. The Islamic Revolution paves the way for the universal sovereignty of ‎the righteous leadership and the merciful government of Imam al-Mahdi.”‎
‎ ‎
The member of the Society of Seminary Teachers of Qom added, “Today, one of the most ‎important issues in the world for the spread of religion is the mastery of international ‎languages, especially Arabic and English. Today, one of the needs in the field is the ‎answering of religious questions, theological issues and values.” ‎
‎ ‎
He continued, “The Islamic Revolution has had many blessings, including the introduction of ‎Shi’ism to the Islamic world. In the past, no one knew about the Shi’ahs, but today, Shi’ahs ‎have been introduced in the shadow of the Islamic Revolution. The Islamic Seminaries must ‎embark this path and fulfill their mission of spreading religious beliefs and introducing Shi’ism ‎to the world.”‎
‎ ‎
Ayatollah Ka’bi emphasized that in Islam government is formed to fulfill the mission of divine ‎prophets – that is, create order and security, improving people’s livelihoods, combat ‎poverty, corruption, discrimination, pursue social justice, guide and promote ethics and ‎restore public rights and legitimate freedoms based on trust.‎

His Eminence added, “In Islam, the goal isn’t to gain power – power is a means of material ‎and spiritual service and securing the religion and material world of the people.”‎

Referring to the mission of the clergy, Ayatollah Ka’bi said, “The clergy must carry out their ‎historical mission to deepen the teachings of Islam, fight heresies, deviations and promote ‎the Statement on the Second Phase of the Islamic Revolution and defend the rights of the ‎people.”‎