US, Israeli and British intelligence services present in Bahrain 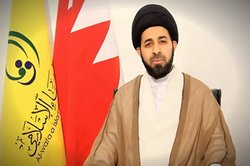 Hujjat al-Islam al-Sanadi noted that the American, Israeli and British intelligence ‎services are monitoring the activities of Bahraini revolutionaries.‎

RNA – In an exclusive interview with Rasa News Agency, Hujjat al-Islam Sayyid ‎Murtadha al-Sanadi, the secretary-general of Bahrain’s al-Wafa Islamic Party, said, “In ‎the past several years, the Al Khalifah regime has imposed security measures and ‎widespread pressure on Bahraini revolutionaries such that we are witnessing increased ‎detentions every day.”‎
‎ ‎
The Bahraini cleric added, “The pressures imposed on the revolutionaries by the Al ‎Khalifah government have increased since the regime’s officials held various meetings ‎with the leaders of the Zionist occupation regime and the United States and in fact, all ‎these actions against the revolutionaries have occurred with their green light.”‎
‎ ‎
Hujjat al-Islam al-Sanadi said that the Al Khalifah regime is afraid of the popular ‎movement becoming a revolutionary movement and for this reason, it sought the help ‎of the Israeli, American and British intelligence agencies to stop them.‎

His Eminence said, “More than 6,000 prisoners are in the prisons of the Al Khalifah ‎regime, which are struggling with many problems. They are seeking to create a revolt ‎in the prisons by resorting to various strikes.”‎

He condemned the normalization of relations with the Zionist regime and said, “The ‎Bahraini people condemn any normalization of relations with Israel and have expressed ‎their disgust with the various demonstrations against this action by the government.”‎
‎ ‎
It is worth noting that in a special report which was aired on Israel’s Channel 13 on ‎December 12th quoted details from behind-the-scenes efforts to sign a “non-aggression ‎treaty” between the Zionist regime and several Arab countries.‎
‎ ‎
A correspondent for the network quoted Israeli, Arab and American officials as saying ‎that Washington is trying to persuade four countries – namely, the United Arab ‎Emirates, Bahrain, Oman and Morocco – to sign a treaty with the Zionist regime.‎
‎ ‎
The non-aggression treaty, although it doesn’t resort to the normalization of relations ‎and peace, commits the parties to not attacking each other. Such a treaty would make ‎the secret relationship between the Zionist regime and a number of Arab countries take ‎a step forward and take a semi-formal state.‎

Thousands of anti-regime protesters have held demonstrations in Bahrain on an almost ‎daily basis ever since a popular uprising began in the country in mid-February 2011.‎