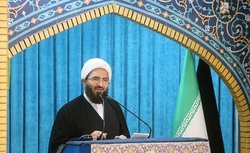 RNA – Addressing worshippers in Tehran on Friday, Hujjat al-Islam Mohammad-Javad ‎HajAliAkbari likened the United States government to “an old and tired lion” that growls every ‎once in a while to scare the cowards.‎

‎“We are witnessing the decline of United States imperialism every day,” he added, saying the ‎internal developments in the United States have embarrassed the Washington government.‎

He also noted that the United States has been plotting to harm the axis of resistance in order ‎to make up for its defeats.‎

‎“The United States is trying to hijack the ordinary protests in Iraq and Lebanon,” he added, ‎pointing to the plot to attack the Iranian consulate in the Iraqi city of Najaf.‎

Hujjat al-Islam HajAliAkbari also lashed out at the United States, Europe and certain small ‎governments in the region for diplomatic supports for the recent unrest in Iran, saying they ‎had made arrangements for two years to foment unrest in the Islamic Republic.‎

Following a hike in the price of gasoline earlier this month, a number of Iranian cities saw ‎sporadic protests that turned violent in some cases. A number of banks and government ‎buildings were set ablaze.‎

Meanwhile, anti-Iranian media outlets as well as some Western officials, including United ‎States Secretary of State Mike Pompeo, voiced their support for the rioters who took ‎advantage of the protests in a number of Iranian cities.‎

In remarks on Wednesday, Supreme Leader of the Islamic Revolution Ayatollah Sayyed Ali ‎Khamenei praised nationwide rallies held over the past week in support of Iran’s Islamic ‎Establishment and said the people managed to thwart “a very dangerous conspiracy” ‎hatched by the enemy.‎

‎“The grave, extensive and very dangerous conspiracy that the Global Arrogance (the United ‎States) and Zionism spent so much on and worked for so that they could cause this ‎destruction, villainy, and murder in Iran at a crucial time was quashed by the presence of the ‎people,” the Leader stated.‎