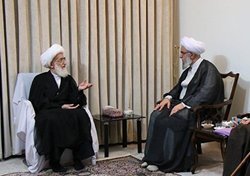 Referring to the hard attack by the Yemeni resistance against the enemies, the revered ‎source of emulation said, “The United States and Saudi Arabia are seeking to cover up their ‎defeat by accusing Iran and through their propaganda games.”‎

RNA – Grand Ayatollah Hoseyn Nouri-Hamadani met with Ayatollah Reza Ramazani, the new ‎secretary-general of the Ahl al-Bayt World Assembly, and said that the enemies have always ‎used dissension and disagreement to harm the Islamic ummah and said, “This issue has ‎always existed throughout history and the enemies are investing more in this route every ‎day.”‎

The revered source of emulation added that after the victory of the Islamic Revolution and ‎the rise of pure Islam, the enemies used all their power to extinguish the light of pure Islam, ‎saying, “In the beginning, they created the eight-year ‘Imposed War’ [Iran-Iraq War] which, ‎through divine measures, the late Imam Khomeyni ended to the favour of Islam and the ‎Islamic Revolution.”‎
‎ ‎
Ayatollah Nouri-Hamadani said that the enemies, knowing that the military option wouldn’t ‎work against Iran, said, “After facing disappointment in the military arena, the enemies ‎began propaganda and cultural and psychological warfare and launched Shiaphobia and ‎Iranophobia to crush the Islamic Revolution.”‎

His Eminence added, “One of the enemies’ actions was to use mercenaries against Islamic ‎Iran. If Saudi Arabia didn’t rely on the enemies and money, one day it would fall because if ‎they didn’t have any money, those who don’t have a popular base would be forced to cling ‎to the powers and spend money and eventually be addressed as ‘lactating cows.’”‎

Ayatollah Nouri-Hamadani pointed to attack by the Yemeni resistance on the Aramco oil ‎facility in Saudi Arabia and said, “The Yemenis hit the Saudis with their missiles and this ‎angered the enemies and amazed everyone at how these missiles hit the oil facilities despite ‎the arrogant powers’ support for the House of Saud.”‎

He added, “Now they have launched a new game that missiles were from Iran and Yemen ‎doesn’t have such power and they are trying to cover up their fiasco through propaganda ‎games.”‎